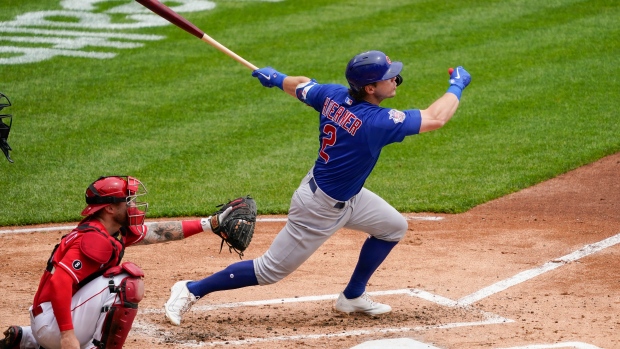 Oakland Athletics pitcher Jesus Luzardo may have suffered the strangest injury of the season thus far.

Jesus Luzardo has a hairline fracture in his pinky finger. Broke it while playing a video game, bumped it accidentally on a table, per Bob Melvin.

At some point last week, Luzardo was playing a video game and accidentally fractured his pinky after bumping it on a table. He attempted to pitch through the injury but struggled badly against the Baltimore Orioles on Saturday, allowing six runs (three earned) on five hits and two walks over just three innings. The A’s have since placed him on the injured list.

Los Angeles Dodgers’ hurler Dustin May also went down with an injury, which many fear will be serious, as the young pitcher was immediately removed from his recent start after throwing a pitch and experiencing “shooting pains” up and down his pitching arm

Managers needing to navigate around these injuries or those to Corbin Burnes (undisclosed), Luis Robert (right leg), or Travis D’Arnaud (thumb) can take a chance on these players rostered in fewer than 50 per cent of ESPN leagues.

Hoerner spent the first two weeks of the season at the Cubs’ alternate site after losing the position battle at second base to David Bote and Eric Sogard.

The 23-year-old infielder was recalled two weeks ago when shortstop Javier Baez missed time with an injury. Since being recalled, Hoerner has hit .389 with seven RBI, three stolen bases, and six doubles in 11 games.

The Cubs have also helped Hoerner adjust his swing to gain more power and lift. The results have been positive early on, as Hoerner has made significant gains in his exit velocity, launch angle, and hard-hit percentage when compared to last season.

His 28.7 feet per second sprint speed is in the 93rd percentile league-wide, on par with noted speedsters Jazz Chisholm and the aforementioned Robert.

The Cubs’ 2018 first-round selection is a contact-oriented hitter who will provide an average close to .300 and decent steals totals as long as he remains a regular in the lineup.

O’Neill missed just under two weeks after being placed on the injured list with a right groin strain. Since being activated on April 23, the Canadian has been on a tear.

In nine starts since being reinstated, O’Neill is slashing .371/.389/.743 over 36 plate appearances. The Burnaby, B.C. native has flashed his power potential, crushing four home runs and driving in seven runs over that span. He has also chipped in with his legs, stealing two bases over the past week.

A closer look at O’Neill’s advanced metrics indicates the free-swinging outfielder will continue to provide plenty of pop. 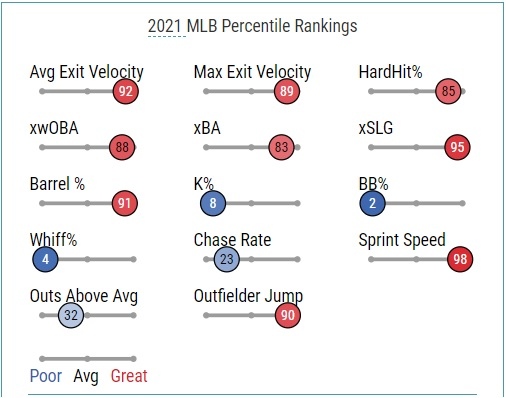 The 25-year-old has elite exit velocity, barrel percentage, and expected slugging percentage. O’Neill’s sprint speed is also the fifth fastest in the league and he may be able to contribute double-digit steals over a full season. He has a history of decent base stealing, as he had 14 swipes at Triple-A in 2017.

O’Neill will be a batting average risk as his strikeout rate, walk rate, and whiff rate are near the bottom of the league. However, if he plays a full season, O’Neill could end up with 30 home runs and 10-15 steals.

Murphy really struggled out of the gates, as he dealt with a wrist injury to start the year. Over his first nine games the 26-year-old hit just .136 with 13 strikeouts in 29 at-bats.

He’s found his rhythm over the past two weeks, hitting. 265 with four home runs, including three homers over his past five games. Like most catchers, Murphy won’t have a great batting average but he does carry a 17 per cent walk rate, which helped him post a .364 on-base percentage in 43 games last season.

Murphy has increased his launch angle every year he’s been in the majors. As he continues to adjust his approach and hit more fly balls, his already above-average hard-hit rate will result in more home runs.

Murphy will be a valuable player for managers in OBP leagues but will still contribute solid power numbers for those in standard leagues who are willing to live with a poor average.

Veteran reliever Greg Holland started the season as the Royals’ closer, but an early injury gave Staumont an opportunity that he has taken full advantage of.

The 27-year-old righty has earned the last three saves for the Royals and looks to be fully entrenched as the ninth-inning option. Staumont’s best weapon is a blazing fastball that averages 98 MPH and tops out at 102 MPH.

He complements his fastball with an 81 MPH curveball that carries an absurd 61 per cent whiff rate. Staumont is currently holding opponents to a .068 batting average and his xBA of .197 (82nd percentile) and xWOBA of .169 (97th percentile) indicates he will continue to perform well, even with some regression.

Staumont won’t post gaudy strikeout numbers but his skill set allows him to keep the ball in the park and limit any damage done against him when batters do manage to get on base.

The veteran journeyman is playing for his seventh team in 11 years but is currently doing some of the best work of his career. Over five starts, the 34-year-old has compiled a 3-2 record with a 2.67 ERA and 0.96 WHIP. Miley had one poor start against Cleveland, but has allowed just four earned runs over his other 22 innings this season.

The Reds have the second-highest scoring offence in the league and will put Miley in line for plenty of wins. The southpaw has found success with a low walk rate and a career-high ground ball percentage. A low BABIP of .203 indicates some regression is in order as more of the balls put in play go for hits. However, his xFIP currently sits at 3.76 and an ERA at that level will still make him a positive fantasy contributor.

Miley won 14 games with the Astros just two years ago and is once again backed by a good offence. If he can continue to limit walks and maintain his ground ball rate, Miley should be a decent low-end starter in all formats.

Managers who like to stream starters should take a flier on Miley for his start this week, where he gets a rematch against the 27th-ranked Cleveland offence.

German was optioned to the club’s alternate site after a pair of poor starts to begin the season but he has rebounded nicely since being recalled.

In two starts since being brought back to the Yankees, German is 2-0 and has allowed just two earned runs across 13 innings. After allowing four home runs over his first two starts, German made an effort to keep the ball on the ground and has not allowed a homer in his previous two appearances.

German’s has also improved his ground ball rate in every start this season, reaching 55 per cent in his most recent start against the Orioles.

He has an excellent 4.5 per cent walk rate and, if he is able to limit home runs, should be able to maintain an ERA in the high three’s.

He has a pair of tough assignments this week, drawing starts against the Houston Astros and Washington Nationals at home. These will be great tests to see if his improvements will stick or if they were a result of facing a pair of poor offences.