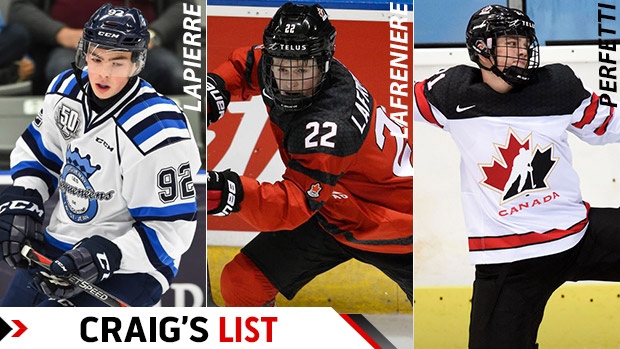 A year after eight players from USA Hockey’s National Team Development Program and 11 Americans overall were drafted in the first round of the NHL Entry Draft, a deep pool of Canadian prospects looks set to dominate the spotlight.

TSN Director of Scouting Craig Button has Canadian Hockey League forwards Alexis Lafreniere (No. 1), Hendrix Lapierre (No. 2) and Cole Perfetti (No. 3) leading the September edition of Craig’s List ahead of the 2020 NHL Draft in Montreal, and six Canadian skaters in his top 10.

“There’s plenty of high-end skill at the forward positions at the top of this class,” Button said. “The top end of this draft could be outstanding. There are a lot of potential impact players available.”

Lafreniere, a 6-foot-1, 192-pound left wing for the Rimouski Oceanic, is the reigning CHL Player of the Year after a season that saw him score 37 goals and 105 points in 61 games. The former QMJHL Rookie of the Year has also represented Canada internationally at the World U18 Championships, Hlinka Gretzky Cup and World Juniors.

“Lafreniere can finish the plays or he can make the plays,” Button said. “He’s the best player at this point, but there are five or six guys who could force their way in to the discussion.”

That group, according to Button, is led by Lapierre, a 5-foot-11, 179-pound centre with the Chicoutimi Sagueneens, and Perfetti, a 5-foot-10, 177-pound forward for the Saginaw Spirit, who both turned heads this summer with strong performances at the Hlinka Gretzky Cup.

“Lapierre is a complete two-way player like an Aleksander Barkov or Patrice Bergeron,” Button said. “Perfetti is this year’s sniper, just like Cole Caufield was last year.”

“Raymond is a precocious winger who reminds me of Mitch Marner,” Button said. “Askarov is best goalie prospect I’ve seen since Carey Price.”

Just outside the top five is hulking Sudbury Wolves centre Quinton Byfield (6-foot-4, 215 pounds), who had 61 points in 64 games during his OHL rookie campaign.

“Byfield is a terrific athlete with similarities in his game to Evgeni Malkin,” Button said. “He has perhaps the greatest upside in the draft.”