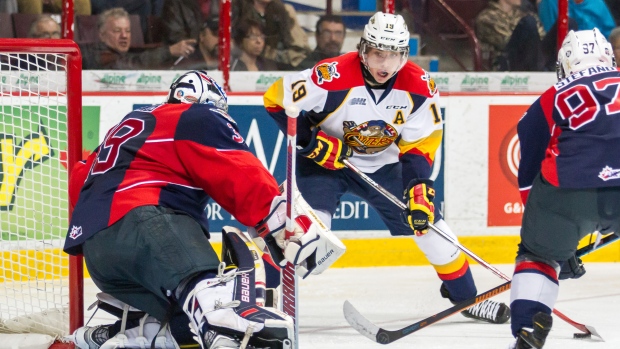 The only suspense heading into the NHL Draft Lottery is the team selecting first overall. There is no suspense as to who will be the first two players selected in the 2015 NHL Draft. The No. 3 selection is where the suspense really begins.

It could be Dylan Strome - a prototypical lead centre who scored four goals and added two assists on the season’s final day to secure his spot as the OHL scoring champion - or Mitch Marner - a highly creative and elusive forward who chipped in six points of his own in a playoff game against the Kitchener Rangers and sits atop the OHL playoff scoring list with fifteen points in six games.

Any comments about Strome riding the coattails of his Erie teammate McDavid is preposterous. He carries his own game with a sound foundation rooted in discipline, smarts, competitiveness and a high-end skill level.

We knew Mitch Marner was good, but didn’t quite know how good he is. The certainty with Marner is the uncertainty of opponents playing against him. His creativity sees the enormous potential - both seen and unseen - in every play and his elusiveness allows him to remain at arm’s length of his opponents.

Strome is the foundation centre of every championship team, while Marner's the embodiment of what makes the game beautiful and brings people out of their seats. So while the first two players have separated themselves from the rest, these next two very well may have as well.

Thomas Chabot played on a bottom team as a 16-year-old but forged a strength to become a key player in a turnaround season for Saint John. His promise at the outset may not have been as well known, but that promise has seen a steady rise up the rankings this season. His command of the game from a mental perspective is exceptional. Combined with his ability to maneuver out of trouble and into advantageous positions, it allows him to meet the game's challenges and contribute regardless of the situation.

They were bypassed in their first year of draft eligibility but that will not be the case this year as they have both demonstrated promise.