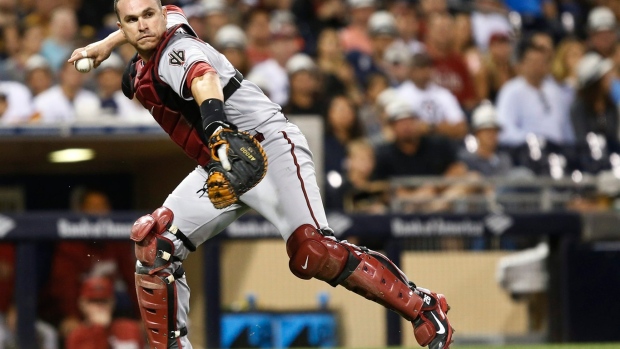 SAN DIEGO - Miguel Montero hit a two-run homer in the sixth inning, helping the Arizona Diamondbacks move out of last place in the NL West by beating the San Diego Padres 3-1 on Saturday night.

Arizona started the season 8-22. With the win, the Diamondbacks moved percentage points ahead of the Padres in the standings.

Josh Collmenter (6-5) pitched 5 1-3 innings, giving up one run and five hits as Arizona won consecutive games for the first time since June 7-8 against Atlanta.

Addison Reed worked the ninth inning for his 19th save in 22 chances.

Montero's 11th home run of the season in the sixth inning came off Stults' low, 80 mph changeup. Paul Goldschmidt was aboard after walking and reaching second on a botched double-play attempt.

Martin Prado grounded to Chase Headley, but his throw to second baseman Alexi Amarista was high, with Goldschmidt being safe. Amarista retired Prado at first, a play which was challenged by Diamondbacks manager Kirk Gibson but upheld.

When Stults hit Cody Ross, the batter following Montero, he was pulled in favour of Alex Torres. He prevented further damage by getting Gerardo Parra and Collmenter on grounders to first base.

Matt Stites relieved Collmenter in the sixth inning, and walked Cameron Maybin to load the bases with two outs. But Rene Rivera, who had two hits, struck out.

The Diamondbacks tied the score in the third inning, thanks in part to an error by Rivera. Ender Inciarte singled and stole second, advancing to third when Rivera's throw was off line. Inciarte scored on Prado's one-out sacrifice fly.

The Padres threatened in the fifth inning when Rivera led off with a single and moved to second base on a sacrifice bunt by Everth Cabrera. But Amarista flied out and Stults struck out.

NOTES: Diamondbacks SS Chris Owings remains out of the lineup with a sore left shoulder. Owings is expected to have it examined on Monday. . OF Mark Trumbo has started to run the bases in his comeback from a broken left foot. . Gibson had no update on when RHP Bronson Arroyo (sprained right elbow) would return. . Padres OF Carlos Quentin (sore left shoulder) is likely unavailable until next week. . RHP Andrew Cashner (sore right shoulder) has yet to resume throwing. . The Padres had gone eight straight games without allowing a home run before Montero's two-run blast. . Diamondbacks RHP Michael Bolsinger (1-3, 4.78) faces Padres RHP Odrisamer Despaigne (1-0, 0.00) in Sunday's series finale.