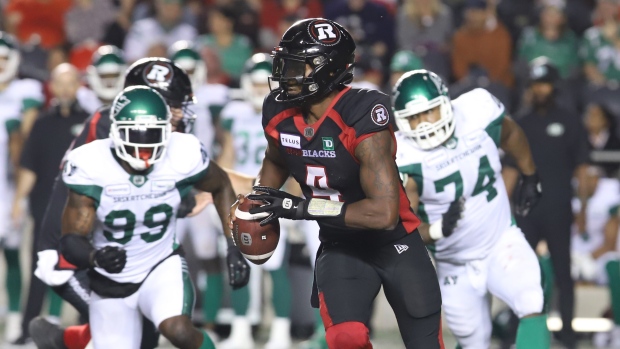 OTTAWA — Were the offences that good or the defences that bad Thursday in Ottawa?

If you ask the Ottawa Redblacks they won't care after escaping with a 44-41 win over the Saskatchewan Roughriders.

Dominque Davis threw three touchdown passes and Lewis Ward kicked six field goals in the Redblacks' win, but it was the Riders who led 468-447 in total yardage.

The Redblacks won't care about that either.

"I really like the group and their mindset. They just keep plugging along but we're well aware that we've got work to do and there's plenty of room for improvement," Redblacks coach Rick Campbell said.

The Redblacks went into the fourth quarter with a 38-27 lead that Ward upped to 41-27 with a 28-yard field goal five minutes in.

The Riders and quarterback Cody Fajardo wouldn't quit as they drove the field. Marcus Thigpen scored on a six-yard run with less than five minutes to play. The extra point was no good however, leaving the Riders trailing 41-33.

Ward made it 44-33 with a 22-yard field goal with less than two minutes to play, but Fajardo scored on a one-yard run with 26 seconds left and threw a two-point conversion to Shaq Evans.

The Redblacks recovered the ensuing onside kick. Fajardo threw for 360 yards and two touchdowns, but it wasn't enough as the Riders fell to 0-2 with the home opener coming Canada Day against the Toronto Argonauts.

"I'm not a big stats guy. Obviously the biggest stat for any quarterback is wins and losses. We just have to get on the game film and figure out what we can get better at," Fajardo said, referring specifically to two lost fumbles.

Davis meanwhile had 354 passing yards and no interceptions as the Redblacks head into their bye week with a 2-0 record. He threw four interceptions last week in a road win over the Calgary Stampeders.

"It's good to go into a bye week 2-0 and get ready for Winnipeg. There will be a lot of corrections to make once we watch the film and it definitely wasn't our best game and there's still room to grow."

The Roughriders opened the scoring with a 19-yard touchdown pass from Fajardo to Thigpen at 7:08 of the first quarter and the score was converted by Brett Lauther for a 7-0 lead.

The Redblacks responded with nine points before the end of the quarter to take a 9-7 lead.

First, Davis connected with namesake Dominique Rhymes for a 20-yard touchdown pass with 1:11 left in the quarter and then found Caleb Holley for the two-point conversion.

The ensuing kickoff from Richie Leone went for a single point.

Things got crazy in the second quarter as Lauther booted a 57-yard field goal in the opening minute of the quarter as the Roughriders reclaimed the lead at 10-9.

Davis threw touchdown passes of 23 and seven-yards to J.C. Beaulieu and R.J. Harris respectively with a two-point conversion following each to give the Redblacks a 25-10 lead with just under 10 minutes to play in the half.

Former Redblack William Powell scored on a nine-yard run at 8:03 cutting the lead to 25-17 following the conversion before Ward kicked field goals of 30 and 45 yards, the second coming in the final minute.

Fajardo then took the Roughriders 75 yards in 15 seconds culminating in a 43-yard touchdown pass to Evans with just four seconds to play in the half making the count 31-20 Redblacks.

The first series of the second half ended with a Saskatchewan fumble that the Redblacks recovered and tuned into a 30-yard field goal by Ward.

Lauther then hit a 20-yard field goal of his own cutting the deficit to just seven at 34-27 seven minutes into the third. That lead was pushed to 11 before the end of the quarter on another 30-yard field goal from Ward and a 64-yard punt single from Leone.