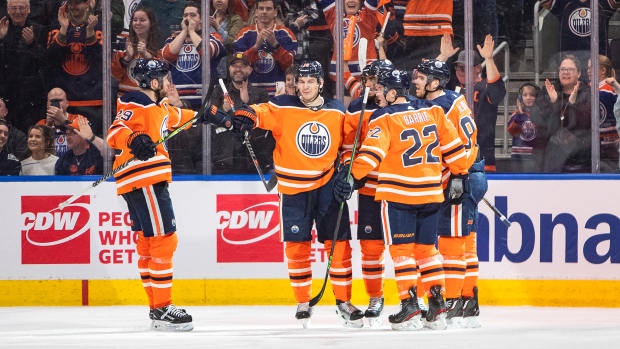 EDMONTON — The Edmonton Oilers are certainly not having troubling finding the back of the net at the moment.

Evander Kane scored twice and Connor McDavid had a goal and a pair of assists as the Oilers kept the longest active winning streak in the NHL alive at five in a row with a 6-3 victory over the New Jersey Devils on Saturday.

“A couple wins in a row can really change the mindset and get the belief a little higher. We got healthy and started playing a lot tighter as a unit of five and that’s really helped our game and led to success,” said Kane, who has 12 goals and 20 points in 23 games since signing with the Oilers.

“I see great potential in this team, that’s why I came here. I think you’re starting to see what it can look like. As we continue to grow our game and become even tighter as a team in the way we play, I think we’re going to be a tough team to beat.”

Leon Draisaitl, Tyson Barrie and Zach Hyman also scored for the Oilers (35-23-4) who have won five in a row on a crucial homestand — a stretch during which they have pounded in 27 goals while allowing 13.

“It got away on us a little bit for a couple of minutes in the third, but good teams find ways to win,” Draisaitl said of the Oilers bouncing back from a 3-2 third-period deficit. “At the end of the day it is two big points for us.

“It has been a bit stretch for us, important games. We had some good teams in here.”

Jesper Bratt had two goals and an assist and Nico Hischier also scored for the Devils (22-35-5), who have lost three in a row and four of their last five.

“It’s frustrating, but if you look at the whole game, I think we did a couple of things pretty well,” Hischier said. “I wouldn’t say it’s a terrible game, but it’s just frustrating at the end coming out of here short.”

Edmonton started the scoring just 1:11 into the first period when Devils goalie Jon Gillies seemed to think he had the puck only to have Jesse Puljujarvi scoop it up behind the net and send it in front to Draisaitl, who put his 41st of the season into a wide-open net.

The Oilers came into the game with a 20-0 record when scoring first this season, the second-best such mark in league history after the 1944-1945 Montreal Canadiens, who went 22-0.

The Devils tied it up five minutes into the opening frame as Hischier sent Bratt in on a breakaway and he undressed Oilers goalie Mikko Koskinen for his 20th.

Edmonton got something of a surprise goal with 2:12 remaining in the second period as it appeared that Gillies had made a pad save on a wraparound attempt by Kane and the play carried on for about 30 seconds before a horn sounded indicating that a review was needed — one that concluded that the puck had crossed the line.

The Devils tied the game up again just 26 seconds into the third period as Bratt redirected a puck caroming off the backboards off of Koskinen and in for his second of the game.

New Jersey took the lead 3:14 into the third as a big rebound came out to Hischier, who was left all alone in front to slide a backhander into the net before Koskinen could get across.

The Oilers got a bad-angle goal to make it 3-3 nine minutes into the third as Barrie somehow snuck a shot over Gillies’ shoulder.

Edmonton then restored their lead eight minutes into the third on the power play as Kane found a loose puck in the slot and guided it in for his second of the game.

The Oilers gave themselves some breathing room just 49 seconds later as McDavid sent a pass in front that went off Hyman’s skates and into the net.

McDavid added an empty-netter to extend his goal-scoring streak to five games and to give him 90 points on the season.

The Oilers hit the road to take on the Avalanche in Colorado on Monday. The Devils return home to face the New York Rangers on Tuesday.