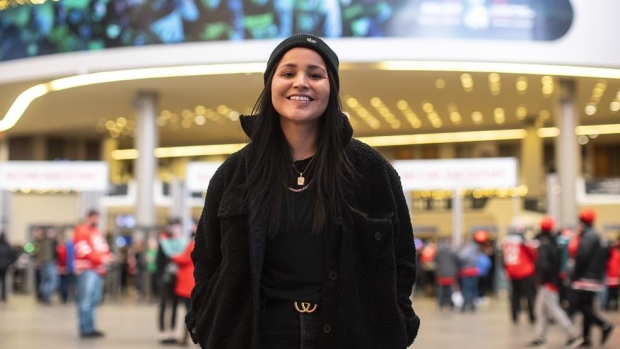 Brigette Lacquette recalls trying out for her first summer hockey team with her sister and the unwelcoming vibe that greeted them in the dressing room.

The First Nations siblings from Mallard, Man., had already navigated the barrier of extensive, expensive travel just to be there.

"They all just kind of stared at us. No one said 'hi.' No one said anything. We sat on one side of the dressing room and they just stared at us. I remember how uncomfortable of a feeling that was," Lacquette told The Canadian Press.

"I got cut and then I went to another team and I'm still friends with at least five or six girls on that team from when I played hockey at 11 or 12 years old. They were so open and accepting. They didn't care about the colour of our skin. They just cared if we could play hockey or not. Then they made it a point to talk to us and made us feel comfortable."

The defender on Canada's Olympic women's hockey team in 2018 is now a Chicago Blackhawks regional scout and the first Indigenous woman to scout in the NHL.

She's a spokeswoman for a program designed to foster those elements in the sport, and one that is accelerating the work of a female hockey association on Canada's east coat.

About 30 per cent of the Cape Breton Blizzard Female Hockey Association is Indigenous, Black or people of colour.

Not only was the Blizzard one of 15 associations to receive a $10,000 grant from Kruger's Big Assist program, it was awarded an additional $50,000 via The Second Assist for its work with two First Nations communities as well as with newcomers to Canada.

"They're promoting inclusion by creating teams in First Nations communities and developing all-female referee crews and training female coaches and things like that, so I feel like they've done a lot for their community," Lacquette explained.

"Traditionally hockey is a white man's sport, so kind of changing that narrative of it just being strictly a white-man's sport. Hockey is for everyone.

"It is important to promote diversity, equity and inclusion in the sport and making sure kids are comfortable signing up for associations and having teammates that understand everyone has a different background and a different story."

Driving at least an hour to get to the nearest arena, as well as the thousands of kilometres their vehicles logged travelling to games, added up. The Cote First Nation helped Lacquette's family cover some costs.

A barrier to playing games there was a lack of certified referees, which Lamey says her association worked to quickly rectify.

The Cape Breton Blizzard Female Hockey Association has doubled in membership in two years to 300 playing on 18 teams.

Roughly 90 hail from the Eskasoni and Membertou First Nations and another handful from Whitney Pier, which is historically an area of Black and newcomer communities.

"In reaching communities who have historically been excluded from the game, I never use the term under-represented because they always wanted to play," Lamey said. "The want was there."

Since parents drive hockey associations, getting those without a hockey background into the game was key, she said.

"What if you have a number of new Canadians, you have a lot of people from historically excluded communities whose parents didn't have the opportunity to coach?" Lamey explained.

"We sometimes need to do coach training. Any parent can be on the bench with a coach course. You don't have to know how to skate."

Covering the cost of goaltending equipment — because a league can't survive without goalies — and developing First Nations coaches were other ways the association grew its membership.

"I am specifically working next year on having our first Indigenous female referees," Lamey said.

This report by The Canadian Press was first published April 15, 2022.