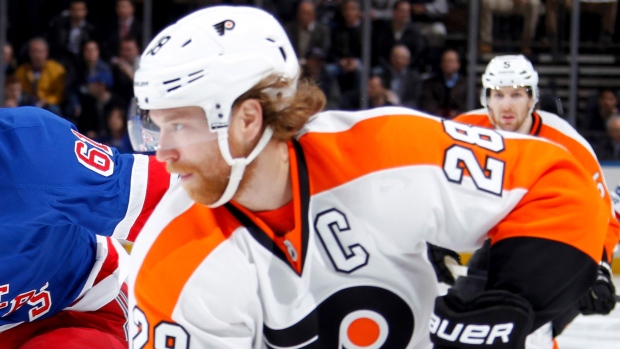 The phrase 'most valuable player' is a tricky one for a lot of people, me included. I think there is a large sect who, without pause, heap that label onto Pittsburgh’s Sidney Crosby, indisputably the league’s most talented player.

However, I think it’s impossible to ignore the fact that team effects play a significant role in determination of how valuable a player is to his team. While Crosby plays second fiddle to no one in the National Hockey League, I think there’s a compelling argument to be made about the rest of the Pittsburgh Penguins being an adequate hockey team. That is to say, when Sidney Crosby’s off of the ice, the team is doing a bit more than just surviving.

On the other hand, we got our first taste of Philadelphia without center Claude Giroux Saturday night, and it wasn’t pretty. The Flyers conceded five goals to the lowly Devils in a game that wasn’t particularly close. Giroux, of course, missed the game after suffering a left leg laceration, and could miss a week of action.

The problem with the Flyers -- perhaps true for them more than any other team pushing the thresholds of the hard salary cap -- is that they don’t have enough talent on the roster. A large reason why this is true is because the team made indefensible decision after indefensible decision over the past couple of years to bleed the cap dry, including a six-year, $30MM contract for already-healthy-scratched Andrew MacDonald (contract originally described as an “atrocity”), and trading a productive Scott Hartnell for a less productive R.J. Umberger (“trade is pretty clearly a loss for the Flyers”). So, too, does $22.5MM for an already-healthy-scratched centre (“Why would you spend precious remaining dollars on an aging center?”) and trading James van Riemsdyk for Luke Schenn (“Luke Schenn was one of Toronto’s worst defensemen last season”). These moves aren’t hindsight-guessed – the links, from the blogosphere and beyond, were posted around the time of the moves.

Surprise! Extremely few of these worked out. And it’s created a situation where the Flyers basically have nothing to offer outside of their top-line. I note that this top-line is fantastic – Jakub Voracek complements Claude Giroux so well, that it hardly even matters who the third player is in that group. However, the Flyers are nothing short of a lottery team when they come off of the ice.

This gets back into the ‘most valuable player’ part I alluded to earlier – just how dependent the Flyers are on Giroux to do, well, everything. To show this, I pulled the Corsi% and Goal% numbers for both Sidney Crosby and Claude Giroux in 2014-2015 at even-strength. The difference is startling. 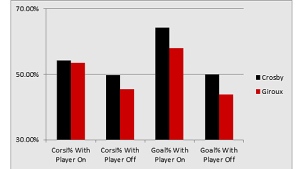 Pittsburgh and Philadelphia are comparatively dominant when their top-lines are on the ice. We can see this in the Corsi% With Player On and Goal% With Player On, where Crosby, et al., and Giroux, et al. routinely dominate the opposition.

What’s ultimately problematic about Philadelphia’s situation at the team-level – and what’s certainly going to be their downfall this season – is that the gap between their toughs and the forward/defense depth compiled by the front office has grown to unbelievable levels. To illustrate this, I pulled Scoring Chance% and Corsi% data for the Flyers over the last four calendar years, and noted the beginning of the 2014-2015 season with a vertical black line. 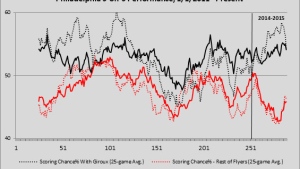 For years, Philadelphia’s depth has lagged behind their top-line, one that’s regularly featured superstar Claude Giroux. Now, we know second, third, and fourth lines – and the associated pairings they play with – have different performance expectations. In most cities, pulling 50% away from the top-line is usually good enough to routinely pick up playoff berths, assuming the top-line routinely wins their battles.

Sure, Philadelphia’s depth players have lagged behind for years. But, they have never been this bad. The gap is sad. Draft lottery worthy, really. And for a team that’s pushing the outer limits of the salary cap, it’s inexcusable and unacceptable.

As a result of all of the above, I’ll be interested in seeing how the Hart Trophy ballot looks at the end of the year, especially if, by some miracle, Philadelphia reaches the postseason. Claude Giroux, to me, feels like the league’s most valuable player. Partially because he’s great at hockey, and partially because his teammates – assembled by the front office, I remind you – are tragically bad.