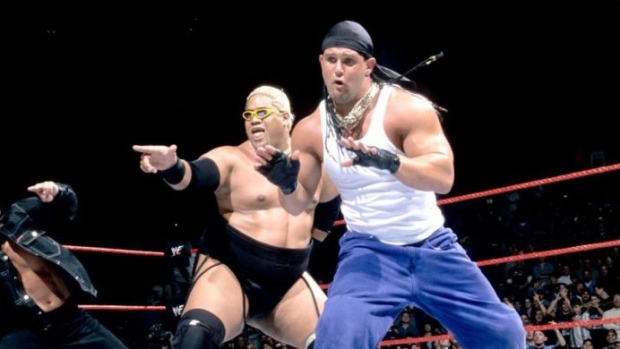 Former World Wrestling Entertainment star Brian Lawler has died at the age of 46.

The son of wrestling legend Jerry "The King" Lawler attempted suicide on Saturday night in a Memphis jail cell, as TMZ first reported, and was not expected to recover.

The Tennessee Bureau of Investigation confirmed his death on Sunday afternoon.

"At the request of 25th District Attorney General Mark Davidson, TBI Special Agents are investigating the circumstances surrounding an incident involving an inmate at the Hardeman County Jail," the TBI said in a statement to the Commercial Appeal. "On Saturday evening, Brian C. Lawler (DOB 1/10/72) was found hanging in his cell. Corrections officers administered CPR until paramedics arrived. Lawler was transported to Regional One Medical Center in Memphis where he died Sunday afternoon. The investigation remains active and ongoing."

Lawler was arrested earlier this month for driving under the influence and evading arrest. He was also arrested in early June over an unpaid hotel bill.

Lawler found fame as "Grandmaster Sexay," one half of the Attitude Era tag team, Too Cool, alongside Scott "Scotty 2 Hotty" Garland. The pair were WWE Tag Team Champions.

A number of figures in the industry expressed their condolences through social media.

RIP Brian Christopher. I think I had every piece of Too Cool merch in 2000.

“RIP Brian Christopher,” wrote WWE star Matt Cardona, who wrestles as Zack Ryder. “I think I had every piece of Too Cool merch in 2000.”

1st time I worked with Brian Christopher was in Louisville I told him "Nobody wants to work with u. Let's have a great match and show them u can. Trust me, please. I'm not out to bury you" He did and we had many great matches. He was at times misunderstood. #RIPBrianChristopher

“1st time I worked with Brian Christopher was in Louisville,” wrote longtime WWE wrestler and trainer “Dr. Tom” Prichard, who worked with Lawler and his father in the Memphis area. “I told him ‘Nobody wants to work with u. Let's have a great match and show them u can. Trust me, please. I'm not out to bury you’ He did and we had many great matches. He was at times misunderstood. #RIPBrianChristopher”

Born in Memphis, Lawler began his career in Jerry Jarrett's United States Wrestling Association in the late 1980s working under the name "Brian Christopher." Though his father also worked in the territory, his relationship with the elder Lawler was never acknowledged during broadcasts.

Lawler signed with the World Wrestling Federation in 1997 and began competing in its light heavyweight division. The following year, Lawler formed a tag team with Garland as Too Cool and was given an ambiguously gay gimmick that was played for heel heat. In mid-1998, the gimmick was dropped with the pair repackaged as hip-hop aficianados, dancing to the ring and after matches. While initially heels, the pair's popularity forced a face turn. They were soon joined by Solofa "Rikishi" Fatu, one of the company's top faces at the time, and the faction was positioned towards the top of the card.

Too Cool feuded with the likes of Edge and Christian, The Dudley Boyz and the A.P.A, winning the tag team titles in Vancouver in the spring on 2000.

With Rikishi turning heel and Garland out with a broken ankle, Lawler was shifted down the card until his release in the summer of 2001 when he was arrested for attempting to bring narcotics across the Canadian border.

Lawler then bounced around a number of promotions, including a two-year stint in Jeff Jarrett's NWA-Total Nonstop Action. He briefly returned to the WWE on a number of occasions, most memorably in 2011 when he was brought in during his father's feud with Michael Cole. It was there that his status as Jerry's son was first openly acknowledged after only being alluded to for years. His last appearance for the company came in 2014 when Too Cool reunited for a match in the WWE's developmental territory, NXT.

Lawler had numerous run-ins with the law and substance-abuse issues. He was sentenced to 30 years in jail in 2009 when he failed to comply with a plea agreement that required a check-in at a rehabiliation facility.