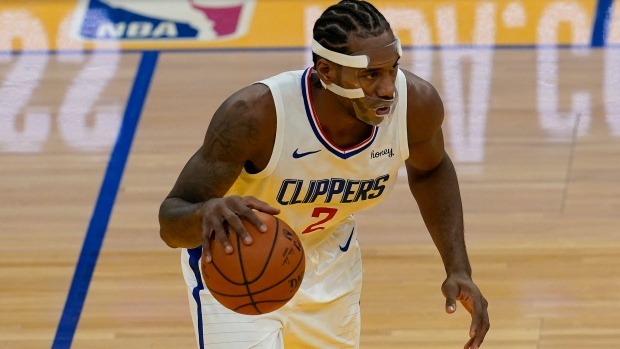 SAN FRANCISCO — Kawhi Leonard scored the tying basket with 6:40 to play, then put his team ahead with a jumper the following possession on the way to 21 points, and the Los Angeles Clippers beat the Golden State Warriors 108-101 on Wednesday night in the first of two straight matchups between the Pacific Division rivals.

Paul George returned from a one-game absence with a sore right ankle to add 21 points and 12 rebounds in the Clippers' fourth straight win against Golden State, which got just 13 points from Stephen Curry on a cold shooting night for the two-time MVP. He tweaked his left ankle late but it wasn't considered serious and Curry will receive treatment Thursday.

He had scored 92 the previous two games, including his career-high 62 against Portland on Sunday night.

Players and coaches on both sides knelt for the national anthem following earlier chaos at the U.S. Capitol.

Marcus Morris Sr. made his season debut after being sidelined by a right knee injury but didn't think the teams should have played. It wasn't discussed, he said.

“It’s hard to really put it into words just the direction this country is going in,” Morris said. “... It’s just unfortunate the state that we’re in in this country.”

“It was so disheartening," Warriors coach Steve Kerr said. "I think everybody came into the arena this evening just sort of dazed.”

Draymond Green received a Flagrant-1 foul with 4:58 left and Leonard converted both free throws. Patrick Beverley made a 3 with 4:14 left, then Nicolas Batum hit from deep the next two times down.

Leonard told coach Tyronn Lue he wanted to play in back-to-backs this season, not typically his routine in recent years, so it’s something they will evaluate regularly.

“I was patient and I'm able to play,” Leonard said of health previously dictating his days off.

Eric Paschall came off the bench to score nine quick points over five minutes on the way to 19 for the Warriors, who used a 9-0 run over the final 1:13 of the second quarter to get within 52-51 at halftime.

“Our philosophy is we want to try to take the best player out,” Lue said. “We know Steph could go for 60 like he did the other day.”

Lue and Kerr were open to their players taking a stand — or a knee — after the violence in Washington and the two coaches talked before tipoff.

“I started the day thinking about how we were going to guard Lou Williams without fouling him, suddenly that didn't seem quite as important when I turned the TV on as shootaround was beginning,” Kerr said. "... It’s just a clear reminder that the truth matters in our country.”

Lue knows when Curry and Green get going, Golden State is tough. Green played in his fourth game of the season since returning from a right foot injury.

“With Draymond back, they have a great two-man connection,” Lue said.

Warriors: Green had six of the Warriors' 25 assists and Curry added five, down from their NBA season-high 41 in a rout of the Kings on Monday. ... Andrew Wiggins had 19 points and has scored in double figures in every game, but didn't have a block after getting at least two in each of the previous four games.

The rivals continue their series Friday night back at Chase Center.