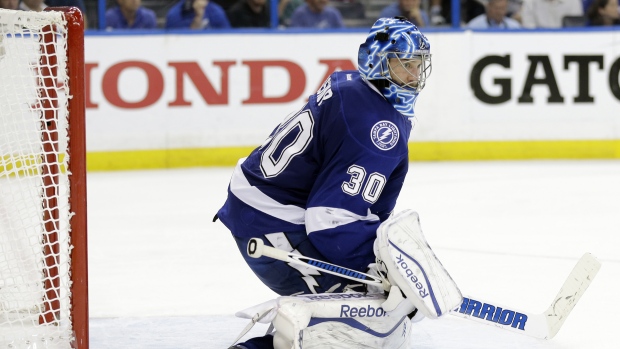 The Stanley Cup Playoffs, now more than ever, tend to be about the goaltending. The 92.1% stop rate goaltenders have posted is currently tied for second all-time, and depending on how Corey Crawford and Ben Bishop perform in the championship round, they could catch the 92.3% highwater mark set in 2012-2013. 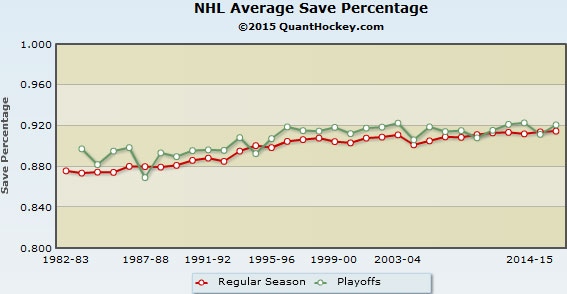 You’ll notice that playoff save percentages generally tend to sit above the regular season save percentages. There are probably myriad reasons for this, but one of them is that teams with better goaltenders – surprise! – tend to out-perform teams with weaker goaltenders. It’s one of the big reasons why most Stanley Cup Final generally features starting goaltenders who are either up-and-comers en route to a big payday, or proven elite talent who are already paid handsomely. In either case, they’re almost always part of the present and the future for their respective organizations.

Recently, there’s probably one exception: the 2010 Stanley Cup Final (this pointed out to me by TSN’s own Ian Mendes) between Philadelphia and Chicago. Philadelphia trotted out journeymen goaltenders Michael Leighton and Brian Boucher; Chicago used only Antti Niemi. It was something of an albatross year for goaltenders, and both teams quickly transitioned in the goalie department following the match-up – Philadelphia to Sergei Bobrovsky/Ilya Bryzgalov, and Chicago to Corey Crawford after a $2.75MM arbitration award to then-RFA Antti Niemi.

This year, quiet as it’s kept, could be a recreation of the 2010 Stanley Cup Final – partly due to their own performance, partly due to life in the salary cap era.

At the individual level, it’s easy to make the argument that Ben Bishop and Corey Crawford are mid-tier starting goaltenders. Consider the table below, which shows their all-states and even-strength save percentages (along with ranks, min. 1000-minutes) this past season:

At first pass, the numbers look alright – Crawford had a better year than usual, Bishop worse, neither altogether impressive or downright troubling. But, again, I think it’s reasonable to say that they aren’t the class of their position.

Where it gets problematic is as it pertains to the NHL’s hard salary cap and, ultimately, the direction the Tampa Bay Lightning and Chicago Blackhawks may have to take things in the next 12-to-18 months.

Let’s start with Tampa Bay, where there are a number of elements at play. First, Bishop’s underperformed this season. Second, his new $5.9-million AAV contract kicks in at the start of 2015-2016, which puts him (by cap hit) inside of the Top 10 for his position. Third, and perhaps most importantly, the Lightning have super-prospect Andrei Vasilevskiy waiting in the wings. Astute observers have already noted that his early career performance bodes extremely well for the future. And, it helps that he makes just $925k through 2016-2017.

One other Tampa Bay note: the Lightning’s immediate financial situation isn’t great, particularly with news that the players are considering just a 2.5% escalator for next year’s salary cap. The Lightning don’t have many important bodies to retain in the off-season, but they already have allocated in excess of $69MM in salary cap for next year. If the Bolts come up short in the post-season and Steve Yzerman and co. want to make a move or two to put the team over the hump, they’re going to need to get rather creative to do so. Moving on from Ben Bishop – whether it be this summer, or a bit further down the road – is certainly an option the team has to consider, particularly if they believe their 2012 first-round pick Vasilevskiy is going to be the real deal.

Chicago’s in a similarly fascinating situation. As mentioned earlier, Corey Crawford really had a nice year for the Blackhawks, but that hasn’t always been the case. If you look at the last four years of data, it’s hard to ignore the fact that Crawford’s outside of the Top 20 by even-strength save percentage, trailing names like Mike Smith, Brian Elliott, and Antti Niemi. He’s been okay – great at times, poor at others, commonly in the muddled middle more often than not.

But, again, of higher importance: Chicago’s cap situation is a looming disaster, with in excess of $66-million committed to the cap and a swath of players to be re-signed (or their voids filled internally/externally). Brandon Saad’s going to be prioritized, but after that, it’s unclear: Antoine Vermette, Brad Richards, Marcus Kruger, and Johnny Oduya are the bigger names in need of contracts, but nothing says ‘cap hell’ like ‘the Blackhawks, regardless of what they decide, only having three defensemen signed for the start of next season’.