Since the Second World War, the 1948 Calgary Stampeders are Canadian football’s only undefeated champion. In the era of 12 or more games a season, the dominance of these Stampeders on both sides of the ball is unmatched. Calgary’s +157 point differential translates into an average winning margin of 13.1 points per game. The Stampeders defence held opponents to just over 5.1 points per game – no team’s defence has been so overwhelming since Canadian football expanded its season to 12 or more games. These Stampeders also enjoyed a bit of drama. Quarterback Keith Spaith engineered five game-winning drives in 1948 – a mark that still stands as a franchise record. Spaith’s last comeback drive of the season led Calgary to victory in the 36th Grey Cup over the Ottawa Rough Riders. 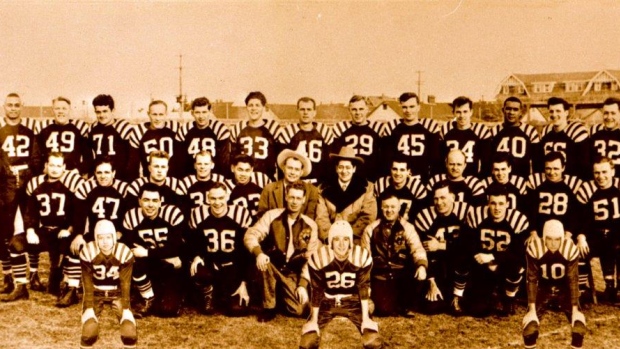 Normie Kwong spent 10 years in Edmonton, and his hard, never-give-in, power running style helped Edmonton win three Grey Cups. But Kwong’s football career actually began with the rival Stampeders. At 19, Kwong learned what it took to be a Grey Cup champion as a member of the undefeated 1948 Stampeders.

This Calgary team’s supremacy wasn’t a one-season wonder. Under head coach Les Lear, the Stampeders won 22 straight regular-season games from August 1948 to October 1949. The Stampeders finished 13-1 in 1949 before losing to Montreal in the 37th Grey Cup.