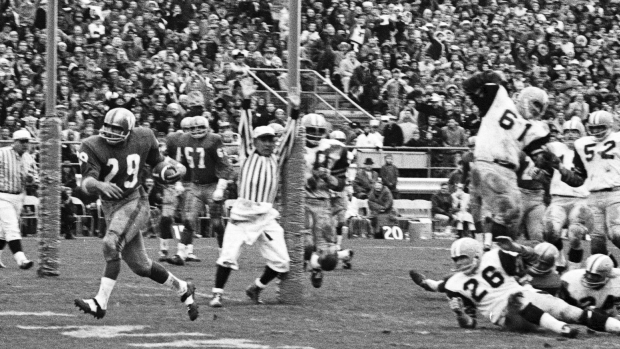 The 1958 Blue Bombers simply overwhelmed teams with more than 400 yards of net offence per game and 3,957 total rushing yards, which is still the third-highest regular-season total in CFL history. Running back Leo Lewis was a punishing dual threat with 1,164 rushing yards and 679 receiving yards. The Blue Bombers showcased all the thrills and creativity that would become characteristic of their young head coach, Bud Grant. Long before the Philadelphia Eagles conjured the "Philly Special" in Super Bowl LII, Grant contrived his own trick play in the 46th Grey Cup. During the game’s second half, quarterback Jim Van Pelt took the snap and pitched the ball to Lewis, who then threw the ball back to his quarterback for the touchdown. Winnipeg’s first Grey Cup title in 17 seasons would kick off the Blue Bombers' most successful period, with four Grey Cup wins in its next five seasons. 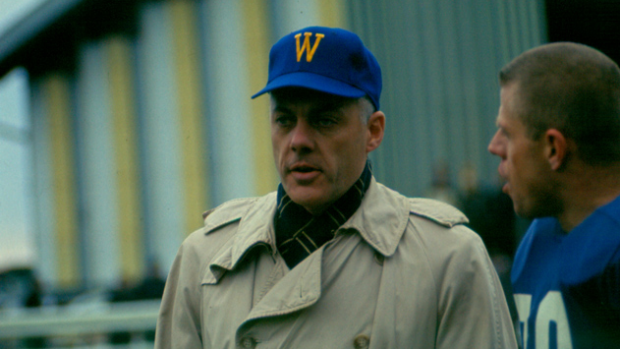 Bud Grant became Winnipeg’s head coach at the age of 29. In nearly three decades of coaching, his offences were revolutionary and his defences were suffocating in both the CFL and NFL. In his customary baseball cap, scarf and trench coat, Grant took the Bombers to six Grey Cup appearances. After 10 seasons and 102 wins in Winnipeg, Grant travelled south to Minneapolis and took the Minnesota Vikings to the playoffs 12 times, including four Super Bowl appearances. Grant is the only head coach in professional football history to be inducted into the Canadian Football and Pro Football Halls of Fame.

THE STAT: 22, points in the 46th Grey Cup by quarterback Jim Van Pelt

Van Pelt did everything for his team in the 46th Grey Cup. Winnipeg’s starting quarterback scored receiving and rushing touchdowns, as well as kicked converts on all four Bomber touchdowns and added two field goals. Van Pelt’s 22-points stood as a Grey Cup record for most points scored by an individual player for 19 years.