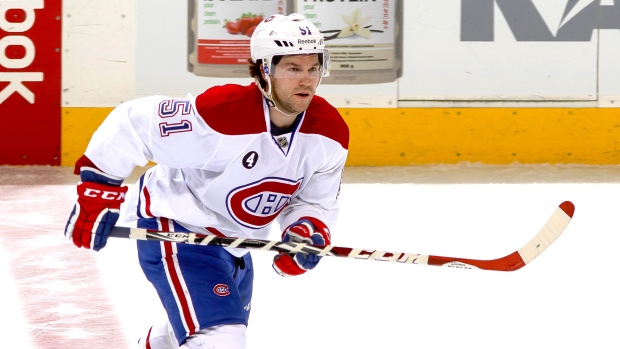 TAMPA, Fla. - David Desharnais tried to rush out of the hospital to play in Game 2 of Montreal's playoff series with Tampa Bay. After some fluids and rest, he's better prepared to rejoin the Canadiens' lineup for Game 3 Wednesday night against the Lightning.

Desharnais missed the second game of the Canadiens' second-round series on Sunday with an illness that also kept him off the team's flight to Florida on Monday. Back on the ice Wednesday, the 28-year-old centre declared himself healthy and good enough to play.

"You battle the whole year to get to the playoffs, it's the fun part of the year," Desharnais said after the morning skate at Amalie Arena. "Not being able to help my teammates for that game was hard, but I'm back tonight and will try to help them win that game."

The Habs trail the Lightning two games to none.

The team was careful to keep Desharnais away while he was sick.

"Every time there's a virus, you don't want to spread it out," Therrien said. "Our medical staff wanted to make sure that the rest of the team didn't get it. We took our precaution."

Desharnais, who has two assists in seven playoff games, blamed teammate Dale Weise for getting him sick. He felt fine Sunday morning and then was in bad enough shape he needed IV treatment at a hospital in the afternoon.

While the Habs were in the midst of losing 6-2 to the Lightning, Desharnais spent five hours in the hospital before being released. He took a commercial flight to get back with his teammates Tuesday and was back on the ice for the morning skate.

It's not the first time Desharnais has been sick like this, but it's not ideal to have it happen during the playoffs.

"It's just the bad timing of it that makes it worse," he said.

Therrien did not reveal who would be scratched if Desharnais is back. Brian Flynn replaced Desharnais for Game 2.