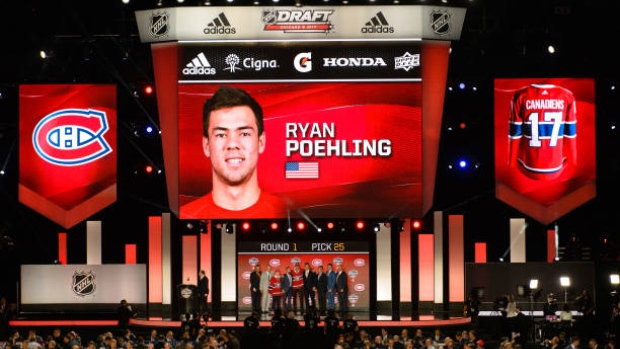 The Montreal Canadiens are slated to enter this month’s NHL Draft with four second-round picks, in addition to the third-overall selection.

Speaking to reporters at the NHL combine over the weekend, Canadiens vice-president of player personnel Trevor Timmins said he believes the extra picks give the Canadiens plenty of ammunition to continue their retool.

“It’s like having two Christmases on the same day. Santa Claus is coming twice. It’s exciting, it gives us a lot of weapons," Timmins said, per the Montreal Gazette. "There’s been a few years that we haven’t had many picks, or many second-round picks. It’s a chance for us to add depth, add some good, solid prospects to our organization. You always find some players that you valued as first-round prospects, but for some reason slip to the second round.

"We’ve had some good second-rounders come out of the draft. P.K. Subban is one of them in the past.”

Montreal has their own second-round pick (35th overall), that of the Chicago Blackhawks (38th overall), and the picks of the Toronto Maple Leafs (56th) and Washington Capitals (61 or 62).

They acquired the Blackhawks selection in February 2016, trading Tomas Fleischmann and Dale Weise to Chicago for the pick and Phillip Danault. They traded Lars Eller to the Capitals in 2016 for two second-round picks and traded Tomas Plekanec to the Maple Leafs this season for the second-round pick, along with Kerby Rychel and Rinat Valiev (who re-signed with the team last week)

The Canadiens were in a similar position in 2013, when they had three second-round picks and selected Jacob de la Rose, Zach Fucale and Artturi Lehkonen. Of the group, only Lehkonen has made a significant impact, though Timmins said that, in part, has led the team's draft strategy to change over the past five years.

“Every draft is different and every season is different,” Timmins said. “I think the game has changed. At that time we were trying to add some size as well as skill. Of those three players, who’s got the most upside today? [Lehkonen] He was the smallest at that time and the last of the three.

“Every year is different, but we see the way the game has gone now,” Timmins added. “Size isn’t as much of an issue anymore. You have to play the game fast and you have to have skill. Even on defence … who would have guessed Victor Mete when we selected him (in the fourth round of the 2016 draft) that he would have been playing in the National Hockey League as a 19-year-old? I wouldn’t have.”

TSN Director of Scouting Craig Button ranked right winger Filip Zadina as the third-best prospect in the draft in his final rankings on Tuesday and he could become a member of the Canadiens on June 22. Timmins said the Canadiens aren't counting on whomever they take to make an immediate impact.

“We’re not looking for a quick fix,” Timmins said. “We’re looking for players that will help build this franchise into an annual contender, not just the playoffs, but to contend for the Stanley Cup.”

The Canadiens have missed the playoffs in two of the past three seasons and finished 28th in the league this past season. Montreal also owns three picks in the fourth round of this month's draft.