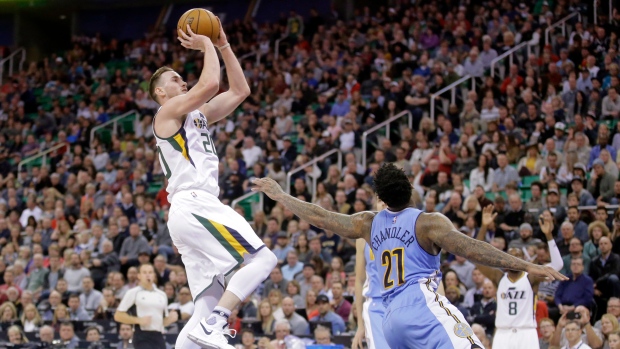 SALT LAKE CITY — The Utah Jazz challenged Gordon Hayward to push his game even further last summer and become a more versatile scorer. The Jazz are seeing those results on a nightly basis through the first quarter of the season.

Hayward matched his season high with 32 points and the Jazz beat the Denver Nuggets 105-98 on Saturday night.

"We talked about this early in the season. We felt like he'd expanded his game," Jazz coach Quin Snyder said. "He added a comfort-level in the post. ... And he's shooting off screens. He's able to score in multiple ways.

"When someone takes something away, he's able to have another option. The biggest thing Gordon's been doing is defending and, as a result, he's getting some easy baskets."

The Jazz used a 31-8 stretch in the third quarter to blow open the game. Hayward took over, scoring both inside and on the perimeter, with 21 points in the quarter. It was the third consecutive 30-point game for the seven-year veteran, who is averaging a career-high 22.8 points and has scored 20-plus points in 11 of 14 games this season. This is the first three-game, 30-point stretch of Hayward's career.

"It's a lot of work that I put in this summer, for sure," Hayward said. "But, also, we're running some good sets for me. ... Just continuing to see the floor a lot better. Seeing where my shots are coming. Taking advantage of how the defence is guarding me. ... Just trusting the work that I did.

"When I'm active and play with a little bounce on the defensive end, I'm definitely more confident offensively because of that. It's all about staying active and getting myself involved in the game."

Rodney Hood chipped in 15 for the Jazz.

Wilson Chandler and Will Barton each scored 20 for Denver.

Denver knocked down seven 3-pointers trying to rally in the fourth quarter, but couldn't complete the comeback. The Nuggets matched a season high with 13 3-pointers.

The Jazz took a 49-47 lead into halftime after a back-and-forth opening 24 minutes in which neither team was able to string together a significant run. Neither team shot the ball well from distance in the first half as the two teams were a combined 4 for 15 from behind the arc.

"I'm happy we showed a lot of fight and heart getting back in the game, not dropping our heads and feeling sorry for ourselves," Nuggets coach Michael Malone said. "Hopefully, that can give us a little juice going forward.

"I'm just really happy with the fact we competed tonight. That's step No. 1 in our recovery."

Nuggets: Nikola Jokic missed his second straight game with a left wrist sprain. ... Denver is now 0-8 when trailing after the third quarter. ... The Nuggets have won just one road game since Nov. 6.

Jazz: Hood returned to the starting lineup after missing the last game with a hamstring injury. He went down hard in the third quarter and limped to the bench, but stayed in the game. ... George Hill missed his second consecutive game with a sprained left big toe.

The Nuggets have lost five of six with a lengthy road trip ahead. Malone is not thrilled with the state of his team.

"We started out in the first half doing all the right things," Chandler said. "It was in the third quarter we kind of got away from that. Everybody, not just one person. We had to climb uphill and exert so much energy. It's hard to fight back from a 20-point deficit and get the win."

Nuggets: Denver visits Philadelphia on Monday for the second game of a six-game trip.