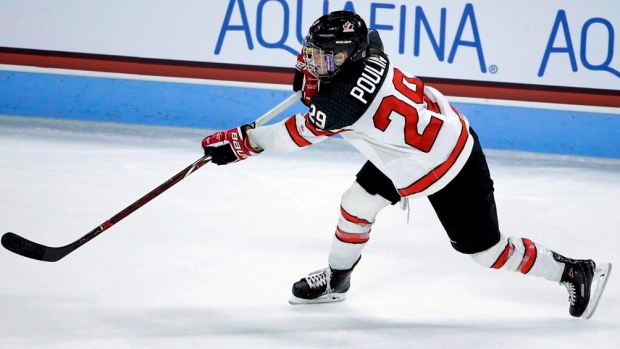 CALGARY — The Canadian women's hockey team has opened a 35-player camp in a Calgary "bubble."

The 14-day camp is the first physical gathering of national-team players in months because of the COVID-19 pandemic.

Hockey Canada invited 47 players to Calgary, but 12 won't participate because of school commitments "and other reasons," the organization said Monday in a statement.

Forwards Rebecca Johnston and Sarah Nurse were among the dozen who didn't.

National team players have skated and trained this winter in Toronto, Montreal and Calgary hubs with access to Hockey Canada skills coaches.

“We recognize it has been a challenge for our players, coaches and support staff, but we have made tremendous gains through our resiliency and strength,” said Gina Kingsbury, director of women’s national teams with Hockey Canada.

"We stress to our athletes about controlling what they can, and that has been shown in their individual work, off-ice training, weekly ice sessions and staying committed through our virtual connections."

Hockey Canada received clearance from the Alberta government to hold the camp, which is closed to the public.

"We are able to hold our camp in a safe and secure bubble," Kingsbury said.

Twenty-two players named to the 2020 world roster were invited to camp, as well as 18 veterans of the squad that won an Olympic silver medal in Pyeongchang, South Korea in 2018.

Seven games against the U.S., including a five-game Rivalry Series, has been Canada's only international competition since finishing third in the 2019 world championship in Finland.

The 2019 Four Nations Cup in Sweden was cancelled because of a dispute between the host team and its federation.

Invited but unable to attend