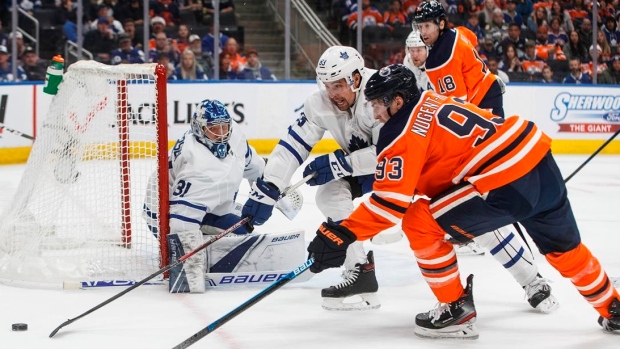 TSN Hockey Insiders Pierre LeBrun and Bob McKenzie join James Duthie to discuss the NHL's delay in naming the hub cities for their Return to Play plan, how Friday's draft lottery will be executed, and Hockey Canada and the IIHF working on a plan for the 2021 World Junior Championship.

I feel like we're a little bit of Ryan Seacrest on American Idol these last few weeks where we keep saying 'And the NHL is set to announce the hub cities... Right after this' or next week. What's the delay this time?

LeBrun: Well, you're right, James. This was supposed to have been the week or hopefully from the NHL, NHLPA's perspective where they would have perhaps come in on to hub cities, finally. And that was the goal. And I think it was Vegas and Vancouver that they were hoping to firm up by the end of this week. But as we know now, the Vancouver bid has been derailed. There were complications when it comes to conversations with provincial health authorities in British Columbia. And so in the past 24 hours, the National Hockey League has started to go deeper and its conversations with both the Edmonton bid and the Toronto bid because it's important to the National Hockey League to try and have one of the two hub cities in Canada, if at all possible. And if that's not possible, LA and Chicago remain in the mix as a potential standby, but the focus certainly in Canada right now. As our own Ryan Rishaug reported on Thursday, that his understanding is that the provincial health authorities there in Alberta have signed off on the plan for the NHL when it comes to the hub city. So it appears that Edmonton would have a clear goal there. So we'll see where this goes. But in terms of trying to get this done by the end of this week, I highly doubt that the National Hockey League would want to make a big hub city announcement on Friday, when it has a marquee event and the draft lottery coming. So given the complexity of this and the work that still needs to be done on both Edmonton and Toronto, I would think that this will go to next week, Monday or Tuesday.

McKenzie: Well, Pierre, you mentioned the Draft Lottery and it does go Friday night 8 p.m. ET being held this year for the first time in the NHL network studios in New Jersey. Kathryn Tappen of NBC Sports will be hosting the half hour production by the NHL. Now NHL Commissioner Gary Bettman and Deputy Commissioner Bill Daly will both be there in their normal roles. That is, Bettman will oversee the drawing of the lottery balls, there will be an auditor from Ernst and Young. But there will not be any representatives from the various clubs in the lottery because of the COVID concerns. So there will be a full videotape of the actual lottery process revealed after the fact once the half hour show is over. As far as Alexis Lafreniere goes, he'll be on this show remotely talking about where he may end up. And we may know who's picking No. 1, but we may not because of the uniqueness of this draft. We only know six of the 14 teams involved in this draft lottery. And any of those eight teams that we don't know could move up into the No. 1, No. 2 or No. 3 spots. So the manner in which Bill Daly does the count down in the flipping of the cards will vary depending on how many teams amongst those eight are able to get up in to snag the one, two or three spots.

McKenzie: Well, Hockey Canada and the International Ice Hockey Federation over the last number of weeks have been right in lockstep on this, and they don't believe they need to make a final decision on how or when or if the World Juniors are going to go this year until late August. Now they are game-planning for every possibility and that includes Edmonton and Red Deer hosting to full houses as per normal. But they've also got schemes where they could be looking at 75 or 50 or 25 per cent attendance or even right down to zero perhaps for Edmonton and Red Deer. But another one they're also keeping as a Plan B or C or D whatever you want to call it, is that this could be shifted to the Hockey Canada WinSport facility in Calgary if it is played before zero fans, and that's an option as well. But nothing needs to be decided on this until late August. Hockey Canada and the IIHF will take that time and make their decision then.