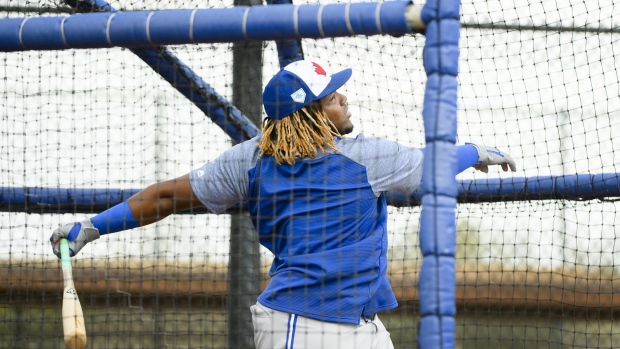 The Toronto Blue Jays updated Vladimir Guerrero Jr.'s weight for the first time in multiple years on Sunday, listing the third baseman at 250 pounds on the league's website.

Guerrero Jr. was previously listed at 200 pounds, though Rob Longley of Toronto Sun reports that weight dates back multiple years. Longley adds, however, the Blue Jays management believes Guerrero Jr. needs to be lighter to handle being an everyday third baseman at the MLB level.

"I just don't see him as a major league player," Blue Jays general manager Atkins told SiriusXM's MLB Network Radio last week. "He's 19. He's accomplished everything he can as an offensive player and there are so many opportunities for him defensively and what he can do to really maximize the power and strengths that he has.

"Everyone then points to defence, but it's really just not about defence. It's about him having a 15-20-year career and starting with an incredible foundation... The physical aspect, the base running, the defence and that physical aspect really plays into what type of offensive player he's going to be. He has the ability to be so versatile and dynamic, and we want to make sure that we tap into all of that potential."

Guerrero Jr., who will turn 20 on March 16, isn’t expected to make his MLB debut until mid-April, allowing the Blue Jays to gain an extra year of team control, taking him through 2025. Atkins, though, has stated that there's no firm timetable for his debut.

He has three hits and one RBI in 12 at-bats in spring training with the Blue Jays. He recorded a double in Sunday's win over the New York Yankees with a one-handed swing.

Guerrero Jr. won the 2018 minor-league player of the year award after a dominant campaign.

In 95 games last season split between four different teams at varying levels in the minors, Guerrero Jr. had a .391 batting average, a .437 on-base percentage and a slugging percentage of .636 with 20 home runs and 78 RBIs.