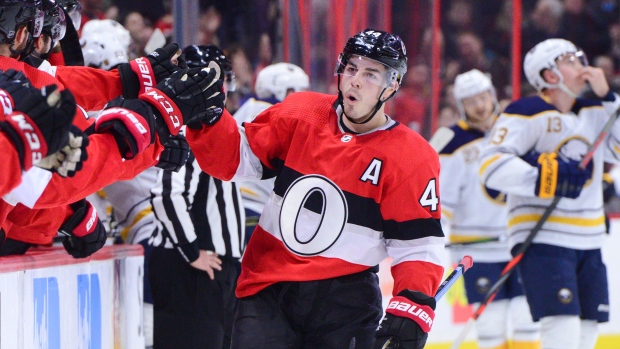 With the NHL trade deadline less than two months away, teams are starting to prepare for major personnel decisions. Two of the more intriguing debates are well underway in Ottawa and Edmonton.

For Ottawa, the decision to roll into seller mode is an easy one – the Senators are definitely an improved team from last year’s disaster on ice, but they are still just 16-18-4 and surely lottery bound for the 2020 NHL Draft. This season was earmarked as a transition year, and consequently, most of the veterans on expiring or quasi-expiring contracts have been considered possible trade pieces.

The piece that will draw the most attention is 27-year old Jean-Gabriel Pageau, a competent middle-six centre in the middle of what looks to be a career season. Pageau’s $3.1-million contract expires at the end of the 2019-20 season, making him an interesting rental option for contenders around the league.

The Oilers are in a different situation entirely, but new general manager Ken Holland is still trying to get his hands around the roster and a true long-term plan. Edmonton is still a legitimate playoff contender, but their comfortable early season advantage in the standings has disappeared, and the organization still has very little short-term cap flexibility.

That’s why winger Zack Kassian is another interesting trade deadline name. Kassian, like Pageau, appears to be having a career year at the right time – he is playing on an expiring three-year deal and will be looking for a long-term contract this off-season.

One of the interesting things about Pageau and Kassian is the timing component. Both players are established middle-six forwards at this point in their career, but the 2019-20 season is trending as an outlier performance for both.

Pageau, playing in a larger role with few other veteran options in Ottawa’s lineup, has amassed 18 goals and 10 assists in 38 games. Pageau’s best scoring season prior to 2019-20? That came two seasons ago (14-goals and 15-assists in 78-games). The same is true for Kassian. The tough winger, who has had the luxury of playing on a line with Connor McDavid and Leon Draisaitl, already has 13 goals and 13 assists in 37-games. He is just three points away from tying his career best set back in 2013-14.

The debate now, of course, is what this season means for the Senators and Oilers going forward. Both players could be extended by their respective teams – Ottawa keeping Pageau as one of the few veterans to help transition the roster, Edmonton keeping Kassian for their playoff push. But we have seen career years lead to contracts that players simply can’t live up to, in large part because they are paid on a fleeting accomplishment.

One of the things that make Pageau and Kassian interesting trade pieces for both teams is that they are converting on shots at a disproportionately high rate. Consider their trended year-to-year shooting percentages for just a moment, and note what happens in 2019-20: 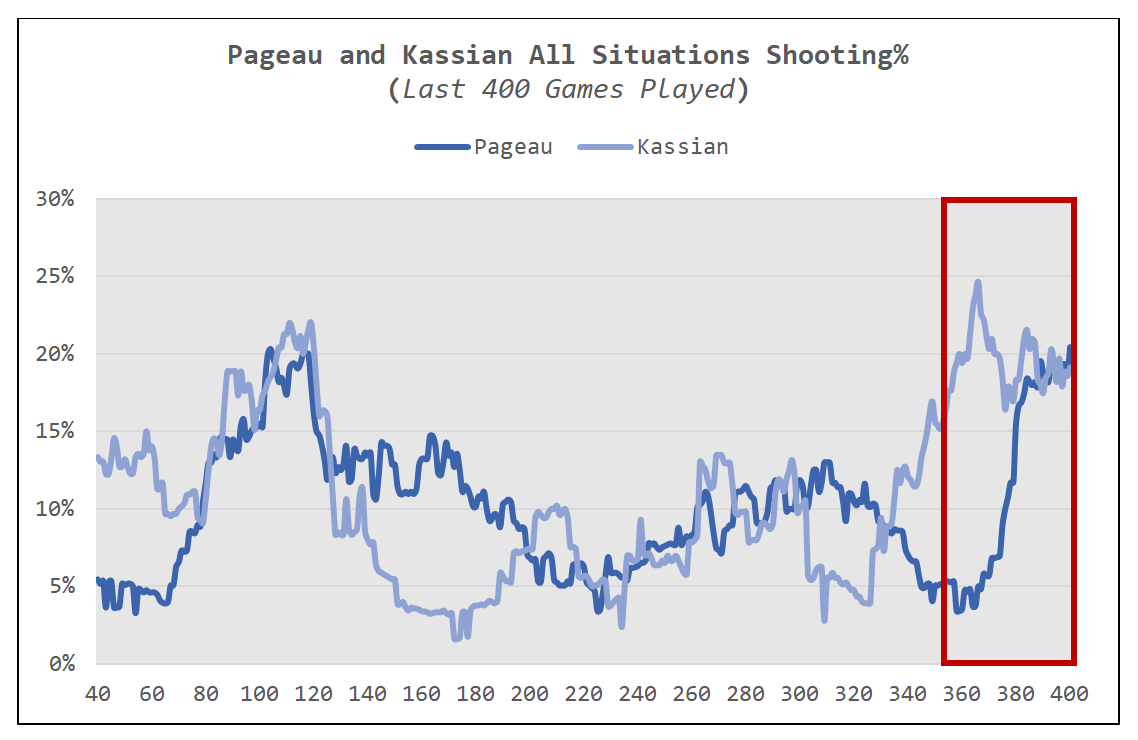 True shooting talent may still be the most undervalued skill in hockey, if only because separating who has it from everyone else is quite difficult.

Consider the cases of Pageau and Kassian for a moment. Pageau, over his career, converts on about 11 per cent of his shots; Kassian is one percentage point higher. But every so often, league average shooters like Pageau and Kassian can go on torrid runs. We saw something very similar happen at the end of the 2014-15 season, where both players were scoring on over 20 per cent of shots for a stretch of games. Pageau and Kassian would then regress towards their historical shooting rates for the next few seasons – at least until this year’s explosion.

It should be noted that even during this year’s offensive surge, most expected goal models think both players are benefiting from some real puck luck this season. Pageau’s expected shooting percentage (which takes into consideration both the volume and quality of shots being taken) is about seven percentage points lower than actual, and Kassian’s nearly five points lower.

This is one of the reasons why shorter-term scoring rates can be a minefield for front offices. Management teams love players who rack up goals and assists, but how do you weigh the possibility (however likely or unlikely) of a player improving offensively in the middle of his career versus the inherent risk of overpaying a player who really may be nothing more than a middle-six option?

In Pageau’s and Kassian’s case, the situation is even more nuanced. Both players have seen a quality of teammate spike – Kassian most emphatically, as he has played a whopping 87 per cent of minutes this year with McDavid – and both are seeing a sizable increase in usage. So in one breath you don’t want to penalize either for playing well this year, but in another breath you need to be cognizant of how many contributory factors may be biasing our interpretation of the value they are really providing.

Tricky times in both markets, to be sure. Pageau and Kassian are both productive players. But with each passing game, their price tag is moving north. For Pierre Dorion and Holland, it may reach a point where a trade is the only plausible scenario.