No one - not the Los Angeles Kings or Mike Richards and his representatives want to even acknowledge it due to the sensitivity of the subject matter – but there continues to be intense efforts to reach a negotiated settlement over their differences.

It sounds like talks are far enough along that it could possibly get wrapped up today, but that is by no means guaranteed.

It's a delicate and complicated case, to be sure. At least a couple of times in the last couple of weeks, a settlement was believed to be getting closer, only to see it not nailed down. But the two parties have been working hard to get it done. It appears it's getting closer again. But as we so often say in difficult negotiations like these, it's not a done deal until it's signed, sealed and delivered and it's not there yet.

The Kings terminated the remaining five years and $22 million dollars owed to the 30-year-old forward after he was questioned June 17 at the U.S. Canadian border in Emerson, Man., when border guards found "some pills in a single bottle." Richards was subsequently charged on August 25 with illegal possession of a controlled substance.

Richards and the NHL Players' Association filed a grievance on the Kings' termination of the contract, asking for the dispute to be settled by an independent arbitrator. No date has been set for that arbitration hearing but what we do know is that the two sides have been trying to negotiate a settlement.

A negotiated settlement makes sense for both parties. If it goes to arbitration, the arbitrator would rule in favor of one party or the other. So the Kings would either be free and clear of Richards' contract or they would be fully on the hook for the balance of the deal. Likewise, Richards would end up with either nothing or everything he's owed. So there's considerable risk for both sides in an arbitration.

If a settlement is reached, there's no word yet on what salary cap penalties the Kings would still face. There's bound to be something, but not likely as onerous as the full value of Richards' contract, which carries with it a cap hit of $5.75 million. If there's a settlement, Richards would undoubtedly become a free agent though there's no telling at this point what monies he would be entitled to from the Kings in a settlement.

The NHL and NHLPA, for obvious reasons, are also part of the process, which adds to the complexity of any potential settlement.

Safe to say everyone is hoping they can put this behind them, especially now that the regular season has begun.

1. Expanded video review in the form of a coach's challenge: All the hardware/software required for on-ice officials to review their own calls on goals involving offside and/or goalie interference‎ is in place.

The monitors are in the penalty boxes at ice level and video replay booths upstairs league wide; both home and visiting teams have in their respective‎ dressing rooms high-definition, state-of-the-art  technology allowing each team to access all the feeds/angles available to the on and off-ice officials, including those in Hockey Operations headquarters in Toronto.

The system was not ready in time to try it out during NHL pre-season games, but the league isn't overly concerned with potential snafus or technical malfunctions. That's because in any situation where there's an in-arena problem with hardware or software, Hockey Operations in Toronto has always had the technical ability to review any call. If for any reason the on-ice officials are having difficulties, Hockey Ops can and will override the process.

As long as a team is still in possession of its timeout, a coach may "challenge" a goal call that he feels was scored as a result of an uncalled offside. If, however, the puck clears the zone after the offside but before the goal is scored, the goal cannot be challenged.

A coach may also "challenge" a goal call or disallowed goal that relates to goalie interference. 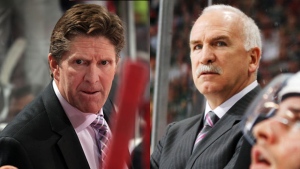 If a ref disallows a goal due to goalie interference, whether a penalty is called or not, the ref, when challenged, may review video at the penalty box monitor and in consultation with Hockey Ops in Toronto reverse his call. In cases where a goalie interference penalty was called, the penalty can be taken down when the disallowed goal call is reversed.

In the cases where a ref is challenged on his call of a goal -- with the coach asserting there was goalie interference on the play -- the referee may reverse his call and disallow the goal. Video review/coach's challenge cannot, under any circumstances, allow the referee to call or add a penalty as a result of the review.

In the final minute of the third period or any time in OT, no coach's challenge will be required as Hockey Ops in Toronto will automatically review those plays.

2. Five minutes of sudden-death three-on-three overtime for regular season games tied after 60 minutes.
3. On faceoffs, the centre in the defensive zone -- not the visiting team, as has always been the case -- must put down his stick first.

It remains to be seen if this has any measurable impact on the game. By all accounts in the pre-season games, it appeared to be a non-factor.

The Case Of Viktor Svedberg

The Chicago Blackhawks open defence of the Stanley Cup tonight on home ice against the New York Rangers and the team on the ice is not exactly as head coach Joel Quenneville would like it.

Swedish defenceman Viktor Svedberg, all 6-foot-9 and 235 pounds of him, has arguably won himself a spot in Quenneville's top four - filling the void created by the departure of Johnny Oduya to Dallas via unrestricted free agency.

But Svedberg couldn't be on the opening day roster because of salary cap complications, specifically getting injured defenceman Michal Rozsival on long term injury relief (LTIR). Had the Hawks been playing Thursday instead of tonight, Svedberg would have been in the lineup. He's expected to be recalled from the minors tomorrow.

What precisely do the Hawks have in Svedberg? 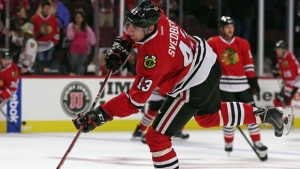 Well, aside from the fact he's as big as Zdeno Chara‎, the big Swede moves well for a big man. His wingspan is enormous but the scouting report on him from the AHL, where he played last season, is that he's an efficient and heady defender who reads the game well both with and without the puck.

He makes good passes to get it up and out. He doesn't always assert himself physically, but isn't shy about pushing back when challenged. He has a rocket shot from the point and could be, in time, a power play shooter for Quenneville.

In a perfect world, the Hawks' defensive pairs after tonight should be Duncan Keith alongside Niklas Hjalmarsson, Svedberg with Brent Seabrook and newcomer Trevor Daly with Trevor van Riemsdyk.

Up front, Quenneville is still tinkering with the composition of a lineup that, again due to cap considerations, is without stalwarts Brandon Saad (traded to Columbus) and Patrick Sharp (traded to Dallas).

Those two offensive fixtures have effectively been replaced by 21-year-old Teuvo Teravainen, who was a regular by the end of the last season, and 23-year-old Russian free agent Artemi Panarin.

For now, and certainly subject to change, Quenneville has opted to "load up" his top two lines. Teravainen steps into Saad's left wing spot on the top line with Jonathan Toews and Marian Hossa. The Hawks expect big growth from Teravainen's offensive game. Panarin, a high risk, high skill player, is the second line left winger on a line with newcomer centre Artem Anisimov and Patrick Kane.

The third line of Andrew Shaw between Bryan Bickell and rookie Kyle Baun isn't as offensively gifted as the Hawks' third lines of recent years, but if Quenneville feels his offence is too top heavy amongst his Top 6, he can always drop Teravainen down to the third line for more balance.

Finding the right offensive mix in Chicago is going to be a work in progress.

No one can say for sure how productive Panarin ‎will be and/or how much adjustment time he will need to smaller NHL ice and North America, but there's no denying his skill, flair and eagerness to get going.

His first shift in his first pre-season game resulted in a too many men on the ice penalty when he jumped on too quickly. It was an inauspicious debut, but here's what he did when he actually played his first shift.

"Those who know (Panarin) tell us we haven't seen anything yet," said one member of the Hawks' front office.

Most pre-season experiments -- having players switch positions and/or breaking up long-standing line combos or notable duos -- barely last‎ the pre-season.

But here we are, set to open 2015-16, and Cup-contending Anaheim are starting the season with Ryan Getzlaf and Corey Perry on separate lines.

It's obvious head coach Bruce Boudreau is looking for a more balanced attack, putting Perry on right wing with Rickard Rakell at centre and Jiri Sekac on the left side. It didn't seem to slow Perry down in pre-season as he scored four goals. Rakell looks as though he's ready to assume a much larger role on this team. 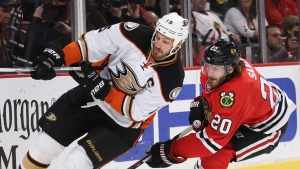 Getzlaf is set to open with speedy Carl Hagelin on the left and well-traveled 27-year-old Chris Stewart on the right. ‎The question that will be asked there is if Stewart can play at a high enough level consistently to warrant lining up alongside the Ducks' captain. He'll certainly get that opportunity to start.

Ryan Kesler between Andrew‎ Cogliano and Jakob Silfverberg (assuming the latter is healthy after taking the hit from Raffi Torres) forms a potentially potent unit.

Boudreau concedes Getzlaf-Perry will see time together, especially after power plays or penalty kills jumble the lines, but he hopes separation of the duo will make the Ducks greater than the sum of their parts.