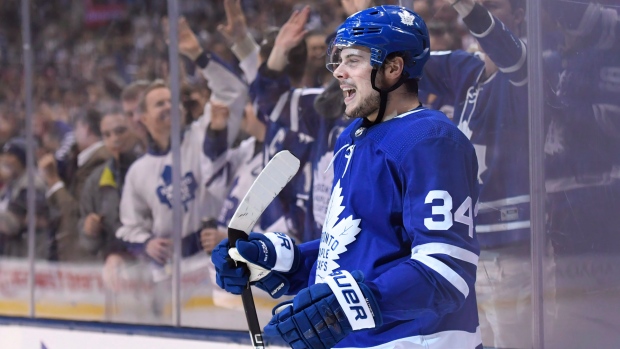 Last week, Toronto Maple Leafs general manager Kyle Dubas said the club was having a “healthy dialogue” regarding a contract extension for centre Auston Matthews. According to TSN Hockey Insider Pierre LeBrun, things are still headed down that path.

“I would say over the last couple of days I continue to hear that things are progressing. Unless there’s a serious setback here over the next few weeks, it certainly wouldn’t shock me if Auston Matthews is signed within the next month here,” LeBrun said Monday on Leafs Lunch.

“Not to say that eight years is completely out of the window, but I think it’s really going to come down to five or six [years]. And the five is intriguing, we talked about the six last week and why that makes sense but the five will be intriguing too – if it ends up being five years – because that’ll be the lowest AAV of all three options. I mean, the shorter you go on the term, the lower you go on AAV. That’s not to say it’s going to be cheap for the Leafs, but that might be the appealing part in terms of trying to keep this team as competitive as possible for the next five years,” he added.

Dubas said the team hopes to have the extension signed as soon as possible to help provide clarity on Toronto’s long-term cap outlook.

“The other thing for sure – and I don’t know this for a fact – but I’m guessing this is going to be quite the structure in terms of all the signing bonus money if this deal gets done. We saw it with [John] Tavares and how that deal broke down and it’s going to be absolutely I think painted that way if Matthews re-signs.”

Mitch Marner, another Leaf on the verge of restricted free agency, is expected to begin negotiations on an extension once Matthews’ deal is out of the way, per Marner’s agent Darren Ferris. TSN Hockey Insider Darren Dreger reported earlier this month that Marner’s camp is “committed to getting the Matthews deal done first before they get into the heavy negotiations with GM Kyle Dubas.” Ferris also told LeBrun that Marner does not plan to negotiate a deal in-season.

Matthews, selected first overall in the 2016 NHL Draft, has 21 goals and 43 points through 34 games this season. He missed a month of action earlier this year due to a separated shoulder.

Toronto will return from the break Friday night in the Motor City against the Detroit Red Wings.