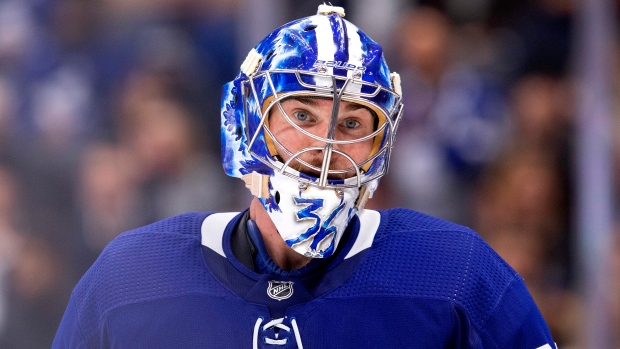 Goalies helped carry the Maple Leafs to the top spot among Canadian teams and into the top five of our Power Rankings this week.

Jack Campbell and Joseph Woll combined for two shutouts and just three goals allowed in four games, and two of those goals came in Toronto’s only loss of the week. The two goalies recorded a combined total of 6.29 goals saved above average. The Leafs are now heading to the West Coast for their next three games, hoping to pad their 4-3-0 record on the road this year.

A tight, 2-1 loss to the Flyers in overtime is the only blemish on an otherwise dominant week from the Flames. They won their next three games by a combined score of 14-2, including a pair of shutouts against Buffalo and Boston.

Not to sound like a broken record, but Andrew Mangiapane is once again stealing headlines, with five goals over the past three games to give him a staggering 15 on the year. He’s already just three shy of his career best of 18 set last year over 56 games. Only Leon Draisaitl, with 18, has more than him in a breakout year for the 25-year-old winger.

With teams like the Hurricanes, Panthers, and Avalanche having perfect records over the past week, the Oilers lost their grip on first place in these rankings, falling all the way down to seventh.

Edmonton continues to live or die by its two megastars. Connor McDavid and Leon Draisaitl did their usual damage in the team’s three games with five and four points respectively, but Evan Bouchard was the only other Oiler to record more than one point this week, with two assists on goals by…McDavid and Draisaitl.

The Jets remain in the top 10 this week, even jumping up one spot from the last Power Rankings despite a 1-1-1 week, thanks to teams around them underperforming.

Winnipeg claimed three out of four possible points in two games against last week’s No. 1 team, the Oilers. This makes it the second straight week that four Canadian teams have cracked the top 10, not a bad showing for the teams north of the border.

Even though the Canucks jumped a couple of spots this week, their season still isn’t going as expected.

The Canucks recorded their 10th and 11th regulation losses of the year, making them one of just six teams to already have double-digit regulation losses. Their offence has recorded a paltry 2.37 goals per game, while their defence isn’t faring much better with 3.21 goals allowed per contest. They also own the league’s worst penalty kill at 62.3 per cent. There is lots of work to be done in Vancouver.

Already shorthanded by significant injuries since the start of the year, Montreal now had to deal with the absence of goalie Jake Allen for the week. The result was a fifth straight one-win week for the Habs.

Montreal at least ended on a high note with a 6-3 win against the Predators, a game that was a blowout until they allowed a Matt Duchene natural hat trick in the third. Montreal will be looking for their first back-to-back wins of the season when they kick off their week against the Capitals on Wednesday.

No movement for the Sens this week, who saw their games postponed after a COVID-19 outbreak. They should be back in action tonight against the Avalanche.