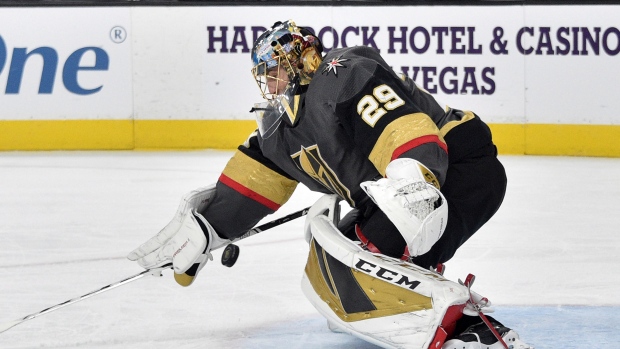 After agent Allan Walsh posted a photo of client Marc-Andre Fleury of the Vegas Golden Knights in net being stabbed in the back by a sword with "DeBoer" written on it on Twitter Saturday night, Fleury confirmed he asked Walsh to take it down Sunday morning.

Fleury says he’s known Walsh since he was 15. They’re very close and talk a lot. Says he appreciates his passion for the game, and Allan was defending him. Says he asked him to take it down and Walsh did.

"I just wanted to stay Allan’s been my agent for a long time," said Fleury in a Zoom media conference. "Always been close. Always talk about hockey or other things in life. He cares a lot about his players. I really appreciate his passion for the game. I think it was merely a way to defend me."

Golden Knights head coach Pete DeBoer has yet to name his starter for Sunday night's second round series opener against the Vancouver Canucks. Since entering the NHL's bubble, Robin Lehner has gotten the majority of the starts in the playoffs, going 5-1 with a 2.04 goals-against average and .904 save percentage. Fleury is 2-0 with a 2.50 GAA and .886 save percentage.

A three-time Stanley Cup with the Pittsburgh Penguins, Fleury backstopped the Golden Knights to the 2018 Stanley Cup Final in their inaugural season. Lehner was acquired at this year's deadline from the Chicago Blackhawks.

"We all want to win, that's why we're here," said Fleury. "I really like Robin. We have a good friendship and I think he's a really good goalie also. There are no hard feelings."