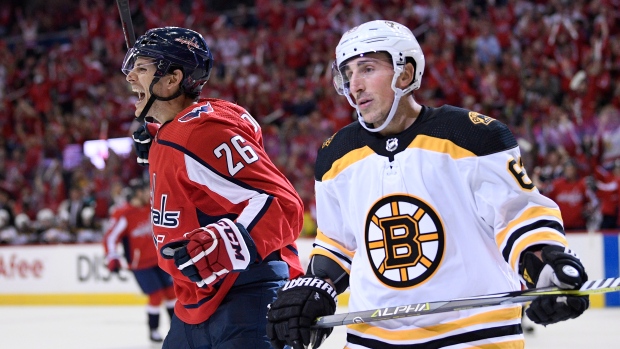 Boston Bruins winger Brad Marchand received a 10-minute misconduct in addition to a two-minute instigator penalty and a five-minute major for fighting after jumping Capitals forward Lars Eller in the third period of Wednesday's 7-0 loss to Washington.

After the loss, Marchand said Eller's goal celebration triggered the attack. "His celebration was unnecessary," Marchand said. "He took an angle in front of the bench and celebrated in a 7-0 game, so I just let him know."

Marchand went after Eller roughly three minutes after the Capitals winger scored to put his team up 7-0. While Eller showed no signs of wanting to fight, Marchand threw off his gloves and started throwing punches at him. Eller eventually dropped his gloves and received a five-minute major for fighting as well. He did not return to Wednesday's game after the fight.

The instigator penalty came with just over six minutes left. Had it come with under five, Marchand would have been given an automatic suspension. He could, however, still face discipline from the league.

"He's a proud guy," Bruins head coach Bruce Cassidy said of Marchand. "I think Eller celebrated a little on a 7-0 goal. It's his prerogative and Marchy let him know that's not acceptable."

The Capitals saw it differently.

“I understand why they were frustrated at Lars there,” T.J. Oshie told NBC Sports. “But you go up to a guy and you ask him to fight and if he doesn't...it's a long season. We play them a lot of times. They could have handled that differently."

"That was something that is unfortunate, and I feel unjust and certainly a player that wasn't prepared for that in Lars," head coach Todd Reirden added. "I think there was an early start to the fight as well."

Marchand, who was minus-2 on Wednesday, has been suspended six times in his NHL career for a total of 19 games. His latest suspension came last January when he received a five-game ban for concussing New Jersey Devils forward Marcus Johansson with an elbow to the head.

Oshie compared Marchand's actions to those which landed his teammate Tom Wilson a 20-game suspension on Wednesday and said he trusts the league to "take care of business" with the Bruins forward.

"[The NHL] set the standards, they want to get the dirty stuff out of the game," Oshie explained. "Which I think at least Tom's play was on the ice and he was hitting the guy that had the puck milliseconds before. And then you see tonight the sucker punches that Lars took in. So they kind of set the standard.

"Marchand has a history, and we trust that they'll do what they're supposed to do and take care of business."