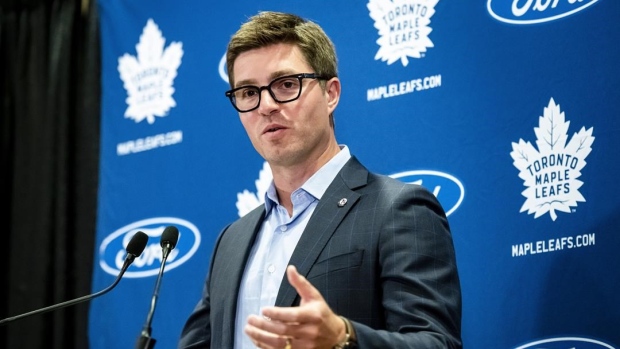 The Maple Leafs practised at the Ford Performance Centre on Sunday.

Kyle Dubas isn't sure what the Leafs need ahead of the National Hockey League trade deadline.

"We haven't yet had any stretch with the team that we thought we were going to have when we started out," the Leafs general manager said in his mid-season media availability. "I would like to give our team a chance to roll as it is constructed ... We want to take as much time as we can and use that to our benefit before deciding to do anything."

Injuries and COVID have led to most teams being in the same spot as the Leafs. And Toronto, like most contenders, is constrained by the salary cap.

"When you go out and acquire somebody, you are probably done at that point," Dubas noted. "We probably don't have a whole lot of bullets in the chamber. We are going to have to pick and choose as we set our sights."

Last year, Dubas acquired pending unrestricted free agent Nick Foligno from the Columbus Blue Jackets before the deadline. Due to quarantine rules, an injury and the reduced 56-game schedule, the gritty forward only ended up playing 11 total games (four in the playoffs) with the Leafs and did not score.

You can understand why Dubas prefers to add players with term remaining on their contract although the return to the 82-game schedule this season changes the dynamic.
"Having a little bit more time this year, I am a little bit more open to it," Dubas said.

The trade deadline is March 21 and the playoffs will not start until May.

Jake Muzzin and Justin Holl formed a steady second pair for the Leafs last season. This year, however, both defencemen have been inconsistent. And the players behind them on the depth chart – 21-year-old lefty Rasmus Sandin and 22-year-old righty Timothy Liljegren – are short on experience.

Still, Dubas isn't so sure the team needs to bolster its blue line. For one thing, he believes Holl is back on track.

"Since we came back from the Christmas break, I thought he has been one of our most consistent players," Dubas said. "For me, that has been one of the personal highlights of the year. It is not the biggest story or the flashiest story, but when someone like that can go through a bit of a struggle, come through it, and regain their form, it is certainly indicative of the type of person he is and the type of player that he is."

Muzzin's situation is a bit murkier. The 32-year-old continues to absorb hard minutes at even strength and on the penalty kill, but hasn't looked like his usual self.

"I have known him for a long time," said Dubas. "I remember when he started in the Soo [of the Ontario Hockey League], and it wasn't always pretty. The one thing about Jake Muzzin is that, especially as people start to count him out or people think that he looks like he is starting to fade, he is very competitive and has a lot of pride. He is able to find his way back."

Sandin has filled in on the second pair with Muzzin out. There have been some growing pains with the increased minutes against tougher opposition, but the Swede has also shown promise. Ditto for pal Liljegren.

"In playing those roles at that age, they are going to have their own ups and downs," Dubas noted. "In terms of potential, those young guys probably have more than anyone else in our system, but what are they able to accomplish here with a little more runway? What can we learn from them that can be instructive for us in terms of how we want to approach the deadline?"

---
The Leafs only made three picks in last year's draft. They only have three picks – a first, second and seventh rounder – this year. Is Dubas willing to further reduce that number to make a deadline deal?

"We're in a mode now where we're trying to win," the 36-year-old said. "So, if we have to deal from that pool to do something that we think can help us, great ... Ideally, I'd like to keep the picks. We are trying not to be short-term or confine ourselves to any window. We are not going to be able to just pick in the second and fifth round every time and find players that can produce."

Muzzin practised in a regular sweater on Sunday for the first time since sustaining a concussion.

"It's different," Muzzin said of the recovery. "I mean, concussions or head injuries are a little finicky sometimes so it's been challenging. But it's part of the game, part of playing a physical sport, so hopefully it's the last one and I'm clear from here on out."

Muzzin appeared a bit rattled after taking a big hit from Klim Kostin on Jan. 15, but he stayed in the game in St. Louis and took part in Toronto's next practice on Jan. 17.

"Maybe two days after I kind of felt a little off and a little foggy," Muzzin explained. "So, it took me a few days to realize that maybe it is something here. You get banged up and you're always so busy and going that you don't really take time to analyze what's really going on. So, it took a few days."

Muzzin said this is the second concussion of his career and the first one in 10 years.

While he was a full participant in Sunday's skate, Muzzin was the extra defenceman in the drills.

"Being on the ice for full practice and full contact and all of that is a big step, obviously," said coach Sheldon Keefe. "Given that it's only one day here before game action, I don't know if that means he'll be available to play. They'll sort through that."

Sunday was Muzzin's first time on the ice with teammates since Jan. 28.

"With this type of time off, getting himself healthy, and resetting himself on the ice, I think you will see him come back and be closer to what we all expect and the form that he is capable of," Dubas said.

After hosting the Hurricanes on Monday, the Leafs have two more practice days scheduled before their next game on Thursday in Calgary.

After taking part in his first career All-Star Game, Jack Campbell was back on the ice with his Leafs teammates on Sunday. But it will be Petr Mrazek who gets the start on Monday. Mrazek has won three straight decisions with a .928 save percentage in those games.

"We thought it would be important to get him back in as quickly as we can," said Keefe. "You combine that with the fact Jack didn't have much of a break necessarily, it just made a lot of sense."

Mrazek spent the previous three seasons with the Hurricanes. This will be the first time he plays them since leaving in free agency. The 29-year-old Czech native is looking to build some momentum after an injury-plagued start to his Leafs career.

"Every game I have a chance to play I'm happy," Mrazek said before the break. "It was a very tough, difficult first half of the season. I'm trying, every time I'm in, to be happy and be positive."
Campbell will start on Thursday against the Flames.