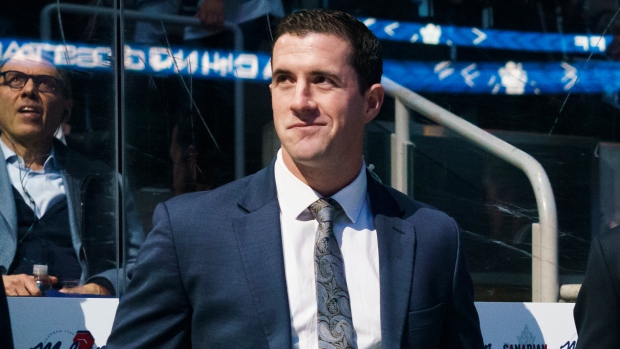 Paul McFarland only spent one season as an assistant coach with the Toronto Maple Leafs, but it was longer and crazier than any National Hockey League season in recent memory.

"You probably couldn't have written a script for everything that we've all been through in the last year," said McFarland, who served as an assistant in Florida for two seasons before joining the Leafs. "The biggest thing to take away from it i​s you have to be flexible and you never know the curve balls that you're going to see."

Even before the pandemic paused the regular season and led to a playoff qualifying round in a bubble, the Leafs experienced a rollercoaster ride, which included a coaching change. McFarland will now apply the lessons learned with the Leafs in Kingston where he is the new head coach and general manager of the Ontar​io Hockey League's Frontenacs.

During a Zoom call with TSN this week, the 34-year-old reflected on what he picked up from being around Kyle Dubas, Mike Babcock and Sheldon Keefe and also explained what he believes Toronto does better than most teams.

The following is an edited transcript of the conversation.
​
What was the biggest thing you learned during your time with the Leafs?

"What they do well, in my opinion better than most, is their emphasis on development and the process they go through to develop not just their current NHL players, but their prospects. Also, the amount of time and effort they put into treating people right and that starts with [president] Brendan [Shanahan] and Kyle and works its way down to everyone in the organization. So, that's a huge takeaway for myself, which we can now apply to how we do things in Kingston ... it has to be our goal to develop not only the players, but also people."

Paul McFarland really wants to be a head coach, which is why he's opted to leave Toronto: "Totally enjoyed my #Leafs experience. Learned a lot in a short time together with [Babcock]. Have a great relationship with [Keefe]. Nothing but the utmost respect for them."

What's something you took from the way the Leafs develop players that you can bring to Kingston?

"Everything's individualized and each player has their own strengths and areas where they can improve and get better and need help. We're working through that process now as a staff here in trying to understand where our players can get better and how we can help them improve, even if it’s virtually, in the current environment. So,​ I think the Leafs do a great job of analyzing their player strengths and trying to put them in those positions of strength, but also trying to understand how they can help them improve and grow."

What was your impression of Dubas and the tone he set for the organization?

"Kyle sets a great example with how hard he works, how passionate he is about our players, the games, and the big takeaway, to be honest, is how he treats people. He treats people the right way not just at a professional level, but on a personal level and that was a huge thing I saw from him in our time together and hopefully something people will say about working here in Kingston. From what I understand, he learned a lot from Lou Lamoriello and I think Kyle has done a great job of continuing that tradition with the Maple Leafs and setting their standard in how they treat people at such a high level."

We've heard stories about Kyle giving staff members book suggestions. How did he go about creating a personal connection with you?

"I still have a book on my desk that he gave me ... so that's definitely one way he does it. But it's also little things like sending the wives flowers throughout the year and little details like that go a long way with not just myself, but our families. Obviously, being in the NHL the schedule demands not being able to spend time with your family throughout the season so I think he understands that perspective and did a great job to keep everyone involved and feeling important."

So, he'd send flowers to your wife on her birthday and stuff like that?

"Yeah, he'd go out of his way. The last example was when we went into the bubble and he sent all the wives flowers, at least I’m hoping it was all the wives (smile) and, for us, it went a long way in showing he does care and not just about the Leafs, but also us as people."

What book did he give you?

"The book is, 'What You Do Is Who You Are.' So, obviously, it's speaking more towards culture. Just a good book and I was actually reading a bit yesterday."

I know the year didn't start well for the Leafs and he was fired, but Babcock has an incredible coaching resume. What did you pick up being around him?

"Getting a chance to work with Mike ... was a great opportunity just to see his attention to detail on a daily basis and how hard he works and stays on it. For a guy that's been doing it for as long as he had and coached some of the teams he had to success, it was great to see his approach on a daily basis. I learned a ton from him even though it was a shortened time period."

What stood out about Keefe?

"​Sheldon did a great job. It's never an easy situation to come in mid-season not having a training camp and practices are few and far between in the NHL even in the best of circumstances. He did an incredible job in setting the tone right from the start. How he wants the team to play and the style of play that he and Kyle both want to see, over time, started to develop and obviously they're still going to work towards that when he has his next training camp."

You're a kid from Richmond Hill, Ont., who was coming home to the Leafs. Did you have a favourite memory or moment?

"Well, I wish the moment had lasted a little longer, but I think probably the comeback in Game 4. Being down 3-0 and the emotions of that game and how we were able to find a way to come back, that's something that's definitely going to stick with me. Going forward, as a coach, it's understanding that you're never out of it ... if you're in a bad spot in any given hockey game, or any series for the matter, it’s just being able to fight through that."

You are now coaching an exceptional talent in 16-year-old Kingston centre Shane Wright. Last year, you worked with Auston Matthews, Mitch Marner and William Nylander. What's the key to communicating well with young, talented guys like that?

"All the best players that I worked with, in the NHL anyways, they all want to get better and they take so much pride in their game and Shane is no different. He's an exceptional kid to talk to and wants to get better and wants to learn. In my conversations with him so far, they've been very easy and informative and I'm just looking forward to getting on the ice with him. The best guys want to be perfect, so it's just understanding that and helping them learn that they're not going to be perfect and there's going to be ups and downs and there's going to be pucks that don't go in the net even when they probably should and you just got to work through those moments and continue to manage expectations and take, as much as you can, the pressure off."

From your perspective, what makes Matthews special?

"The most impressive part for me this year was just how he developed the rest of his game. Obviously, everyone knows he can shoot a puck and how dangerous he is at any given moment of the game, but I thought his competitiveness and his ability to work away from the puck this year really [went up] another level and that makes him not only a threat to score, because he'll have the puck more, but [increases] his overall impact on the game on​ a nightly basis. It was impressive to watch."

We now know the timeline for the next OHL season with training camps set to open Jan. 23. What will be the biggest challenge?

"All these players have been working extremely hard to get better and improve on their skills, but this is as long a layoff as they're going to have in their hockey careers so I think there's going to be an element of breaking some summer habits, I'll call it. And also just getting back into game mode where you're playing real games and a little higher intensity. But I'm sure once we do get to that point all the players are going to be extremely excited to be in that situation."

The Ontario Hockey League announced a revised schedule for its 2020-2021 season on Thursday, with training camps set to begin on Jan. 23, a 40-game season to kick off on Feb. 4 and a restructured playoff format: https://t.co/cYBpjcIiIO#TSNHockey pic.twitter.com/yl5feJHhjD

We touched on Wright, but I also wanted to get your thoughts on Zayde Wisdom, who was drafted in the fourth round by the Flyers last month. He's an incredibly determined individual. What has been your impression of him so far?

"Zayde's a great kid and deserves all the success and accolades that he's getting right now. I'm sure I'm going to have to try and shrink his head a little bit in the near future just because of all the great stories that are out there (smile) but he deserves it all. He's a kid that's worked for everything he's been given to this point and the great thing about Zayde is he's not done. He knows there's still a lot of work to be done and he's working hard every day to continue to get better. The one thing that’s stood out to me about him so far is how much he loves the game. Almost every time I talk to the kid he's on his way to some rink to skate whether it's driving to Peterborough or whatever the case may be. He's always trying to find ice almost anywhere he can get it and, to his credit, that's probably why he's in the situation he's in today.”

Zayde Wisdom might not be a lottery pick in this year’s #NHLDraft, but it’s his story of perseverance that sets him apart.

ICYMI from @rwesthead - our #TSN Original ‘Nothing Given.’