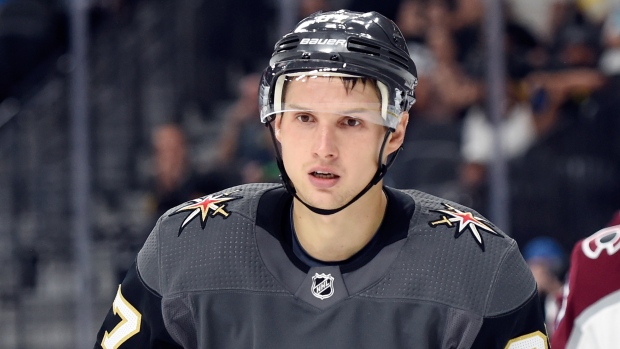 Vadim Shipachyov was the biggest signing of the Vegas Golden Knights' first off-season, agreeing to a two-year, $9-million contract.

The former KHL star has missed the first two games of the NHL season as he waits in the American Hockey League for the team to clear roster spots via trades, rather than waivers.

The Golden Knights currently have nine defencemen on their 23-man roster, none of whom are waiver exempt. As the team looks to find trade partners, Shipachyov, defenceman Shea Theodore and prospect Alex Tuch are all waiting for call-ups from the Chicago Wolves as waiver-exempt players.

According to multiple reports on Monday, Shipachyov is growing tired of waiting for his promotion and his agent is looking into the forward re-joining SKA St. Petersburg in the KHL. Both Golden Knights general manager George McPhee and Shipachyov's agent, Petr Svoboda, through TSN Hockey Insider Darren Dreger, denied the reports.

“There is no truth to that," McPhee told the Las Vegas Sun of the rumours. "He’s not allowed to go back. He’s under contract with us.”

As the Sun points out, Shipachyov could follow the path of players such as Ilya Kovalchuk and Pavel Datsyuk and retire from the NHL and then sign in Russia. However, Svoboda told Dreger his client does not plan to return to the KHL.

McPhee said there's nothing performance-based around Shipachyov's demotion, but he remains without a timeline for his return to the NHL roster.

“That’s a numbers decision,” he said. “As you know, we had three guys who we could assign, and we did, to give us the room that we needed to carry what we are carrying. I do not have a specific date when that will change, but we are working on things.

“...[Shipachyov and his agent] didn’t understand initially. But they do now. This is a roster move that’s not about performance. The three guys we sent down have all earned the right to be here. And we’ll get them here at the right time or as soon as we can.”

McPhee said despite his official designation, Shipachyov is not playing with the AHL's Wolves and is instead waiting out the situation in Las Vegas.

“He came back home to be with his wife because neither of them speak English,” McPhee said. “It was hard for her. So he reported and then came back. He paid his own way back because we are not allowed to do that.”

Despite having the team's preseason top-line centre off the roster, McPhee said he's in no rush to make a move to call him up.

“We are two games into a season," McPhee said. "There’s no rush to do anything; we are not in a hurry to do anything. We will do things when it feels right.”

The Golden Knights are 2-0 to start the season and host the Arizona Coyotes on Tuesday night.