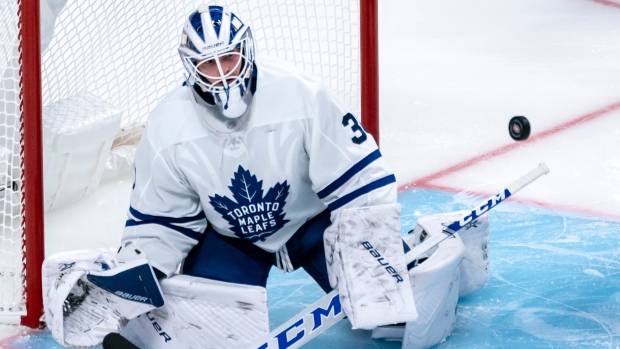 MONTREAL — Michael Hutchinson is making his case as the front-runner to land Toronto's backup goaltender job.

Hutchinson made 38 saves for the shutout as the Toronto Maple Leafs blanked the Montreal Canadiens 3-0 on Monday in pre-season play.

Either Hutchinson or Michal Neuvirth will be Frederik Andersen's backup when the season starts Oct. 2.

"It was fun as a goalie," said the 29-year-old Hutchinson. "They had a good third-period push. I had to stay focused and try to find pucks and make the saves when I had to.

"The guys played really great in front of me. They had some good scoring chances that our guys got sticks on, or they were able to poke the puck away at the last second.

"As a goalie, you see the energy the guys are bringing and it energizes you too."

Neuvirth, who is on a professional tryout with the Leafs, was supposed to share the net with Hutchinson on Monday. But the former Flyers goaltender did not travel to Montreal.

Instead, Hutchinson played a full 60 minutes and frustrated Canadiens players throughout.

With Toronto leading 2-0 in the final frame, the Barrie, Ont., native made big saves on Tomas Tatar on the power play, Nick Cousins from the crease and Alex Belzile alone in front to preserve the two-goal lead.

Earlier in the game, Hutchinson denied Charles Hudon on a 2-on-1 before stopping Tatar on a fast break late in the second.

"Tonight's game was a good game for the goalie," said Mike Babcock of Hutchinson, who was acquired from Florida last season. "We got a lead early. It's no different than pitching, you like to get a lead. It's easier for him. I thought Hutch did a good job."

Toronto's top young prospects were on display, with the team's biggest stars not making the trip.

Forwards John Tavares, Auston Matthews, Mitch Marner and William Nylander were not in the lineup for the Maple Leafs. Defencemen Morgan Rielly and Jake Muzzin also did not play.

But it was the youngsters who took it to the handful of Canadiens veterans.

After a scoreless first period, the visitors struck first at 1:05 of the second. With Toronto on the power play, Yegor Korshkov crashed the net and fired a pass from Nic Petan behind Charlie Lindgren.

Lindgren stopped 22-of-25 shots replacing the injured Carey Price, who is day-to-day with a bruised left hand.

The Leafs doubled their lead five minutes later through Darren Archibald's first of the pre-season. The 29-year-old, who has played 55 NHL games with the Canucks and Senators, drove hard to the net and cashed in Petan's rebound.

Korshkov made it 3-0 for Toronto on a strong individual effort at 8:04 of the third. The Russian stripped the puck off Brett Kulak in Montreal's end before snapping a quick release into the roof of the net.

The Maple Leafs improved to 2-3-0 in the pre-season while the Canadiens dropped to 4-1-0.

"It's difficult to evaluate my team tonight," said coach Claude Julien. "They didn't have a great game. We didn't skate well tonight. We didn't compete. We played what was pretty much an AHL team, 20 guys who were hungry and fought hard the entire game.

"If our guys thought this one would be easy, let it be a lesson to them."

A pre-season rematch is scheduled for Wednesday, with the Leafs hosting the Canadiens at Scotiabank Arena.

Notes: Four Canadiens players were sent down to the Laval Rocket after the game: Belzile, Riley Barber, Jake Evans and Josh Brook. … Montreal defenceman Karl Alzner, recently recovered from a groin injury, made his pre-season debut.