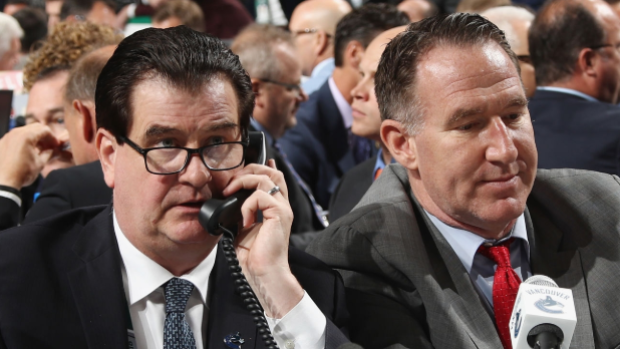 The biggest trade of NHL Draft weekend came from the New Jersey Devils, who acquired defender P.K. Subban from the Nashville Predators at a rather reasonable cost on Saturday morning.

The second biggest trade of the weekend probably belonged to the Vancouver Canucks, who bet big on Tampa Bay’s J.T. Miller. To acquire Miller, the Canucks had to package goaltender Marek Mazanec, a third-round pick in 2019 and a conditional first-round pick that will come due in either 2020 or 2021.

It’s a big price to pay, but Vancouver is trying to plug holes throughout the lineup. The pressure continues to mount on that front, with a budding superstar like Elias Pettersson still on his entry-level contract and a fan base that hasn’t seen playoff hockey since the 2014-15 season.

How did Vancouver get here? It is a long and winding story that spans multiple regimes after carrying one of the league’s best teams at the height of the Sedin Twins era.

One of the underlying themes during this futile run has been a disastrous record when it comes to drafting and developing over the last decade. It was true during the Mike Gillis era (2008-14) when the team usually picked in the lower half of the draft, and it has generally remained true since Jim Benning took over (2014-present). Failing at the draft and failing to develop talent only served to create an environment where a rebuilding front office feels pressure to trade draft picks for established players.

To Benning’s credit, the team has landed a few nifty players during his tenure – the aforementioned Pettersson is at the top of the list – but Brock Boeser (2015 first rounder) and Jared McCann (2014 first rounder) are also success stories.

The problem during the Benning tenure is that the team has struggled to put other picks around these players. Combine that with Gillis leaving the cupboards relatively bare, and you have a team that’s going to struggle to win games in today’s ultra-competitive NHL.

Consider Vancouver’s draft history from 2007-17, through the Pettersson draft. Seventy-one players were selected over that interval, including 19 players taken within the first 60 selections of their respective draft years. I mention this because it’s not for the lack of opportunity that the Canucks have failed on draft day.

The below table shows, by Wins Over Replacement, the value each class has created individually regardless of where they have ended up playing, and the corresponding rank of that team’s class against their peers around the league. (Note: using more rudimentary measures, like games played or total ice time allocated, show similar findings.) 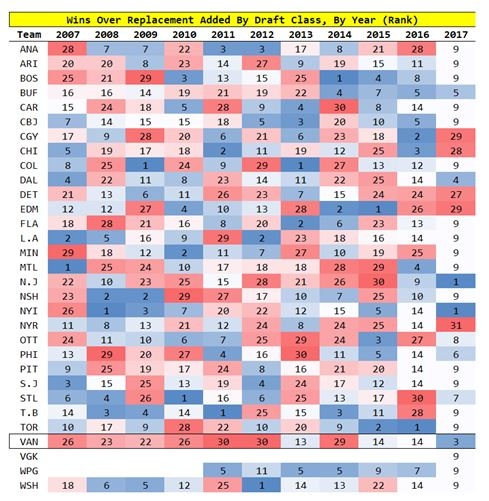 The total WAR table, which is a mere aggregation blind to unitization or expected draft value by pick selection, looks as follows: 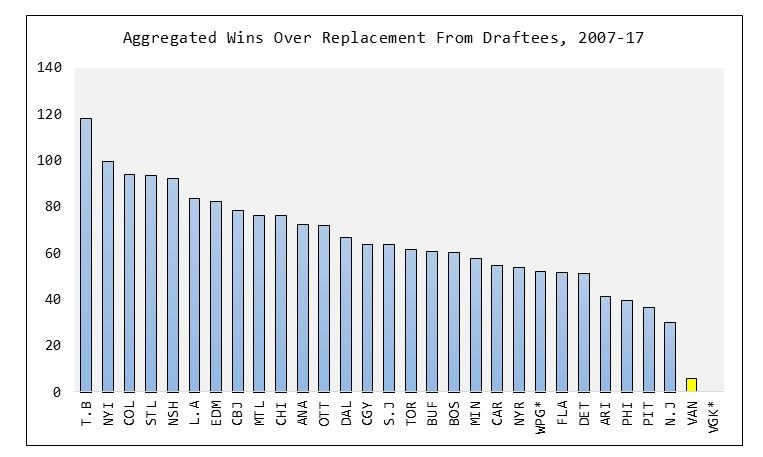 It jumps off the page how poorly Vancouver compares to a team like Tampa Bay, which is an outlier on the other side of the spectrum. Tampa Bay has developed into a juggernaut over the years and a lot of that can be accredited to how well the team has drafted.

Here are Vancouver’s corresponding picks, by year, for reference:

Vancouver, to be blunt, was a disaster from 2007-13. It’s hard to float eight bad years of drafting, but Vancouver had so much talent at the NHL level that they were able to smooth over some of those mistakes.

It’s easy to get lost in the laundry list of names Vancouver has grabbed over the years, so let me make this a little bit easier. Now I will show the same exact table, but only for players who have been at least one win better than a replacement-level player over the years. (For reference: Tampa Bay has 15 qualifiers.)

You can nitpick with the selection criteria – players like Cody Hodgson and Jake Virtanen certainly have been serviceable, and recently drafted players like Olli Juolevi and Kole Lind probably just need more time – but the story is still the same. The Canucks, at least until recently, have missed on grabbing impact players with early picks and struggled even more so to find diamonds in the rough later in the draft. It’s a primary reason why Benning’s rebuilding efforts have been so challenging.

The pessimist sees a laundry list of names that never materialized. The optimist sees that Vancouver has hit on a few players more recently, all through their premium picks. That might be what gives the Canucks hope for their 2018 and 2019 draft classes. First-round pick Quinn Hughes (2018) isn’t far away. Nor is 2019 first-round pick Vasily Podkolzin or second-round pick Nils Hoglander, for that matter. Vancouver sorely needs these players to develop and integrate into the lineup long-term, and perhaps hit on a couple of their mid or late-round picks with a stroke of luck.

We haven’t seen that for close to a decade in Vancouver. But nothing lasts forever. Perhaps we will start to see the tides turn.