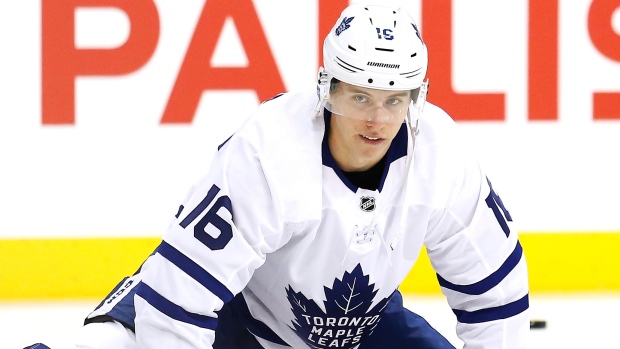 TORONTO – It’s been an alarmingly slow start to the season offensively for Toronto's top line, but Mitch Marner couldn’t appear less stressed about how he, John Tavares and Kasperi Kapanen will turn things around.

“I never [worry],” Marner said with a confident shrug after the Leafs’ optional morning skate on Tuesday, ahead of facing the Minnesota Wild. “It's just, stay patient with it. Stuff is going to come. There’s no worry on our line or on our team.”

Through six games this season, Toronto’s would-be top line has generated a combined seven points at even strength. Tavares has three (one goal, two assists), to rank fifth amongst his Leafs’ teammates in 5-on-5 points, while Marner’s two (goal, assist) and Kapanen’s two (both assists) put them at 12th and 13th respectively.

It’s about as inauspicious a start as that group could have fathomed, especially given the impressive chemistry Marner and Tavares showed playing together last season. Once the Leafs managed to avoid a lengthy contract stalemate with Marner by signing him to a six-year, $65.3 million extension at the start of training camp, it seemed likely the duo would pick up right where they left off.

But while that deal reflected the strength of Marner’s previous two seasons, when he led the Leafs’ in points, there’s been little about this early campaign that’s brought to mind his 94-point effort from 2018-19. Plus, Marner now has the added responsibility of representing the Leafs as an alternate captain for the first time.

McGuire on Marner and Tavares' struggles, Sandin sent to minors and more

NBC Hockey Analyst Pierre McGuire joins First Up to discuss the struggles of the top line, Rasmus Sandin being sent to the Marlies, Morgan Rielly's slow start to the season, Frederik Gauthier's strong play and more.

“I thought we did better [in Saturday's 5-2 win over Detroit], and so we have to just keep getting better with it,” Marner said of his line. “I thought we got some things going. Trying to figure out where the soft spots are and trying to support each other more and trying to figure out how you can get out of the corners and into the middle of the ice more in the offensive zone and create stuff off of that.”

Tavares is in a similar boat to Marner, underperforming so far in the wake of a 47-goal season and being named the Leafs’ captain on Oct. 2. He can appreciate Marner’s continued confidence in the face of their shared adversity, and aspires to project the same attitude.

“Eventually you're going to figure it out and find a way; that’s what makes [Marner] a special player,” Tavares said. “I try to be [like that]. To get frustrated about every single play that doesn't go right will inhibit you for that next opportunity. I've always had a strong belief in myself and my ability, and then you just continue to go to work and do the right things.”

That’s the best way head coach Mike Babcock knows for Tavares and his linemates to navigate this slump.

“It’s early in the year,” Babcock said. “The biggest thing is to just be patient and you work. As a good pro, you come in and do your work each and every day. And it's great when everything goes good, you don’t have to think about anything. But sometimes [when it] doesn't go as good, you gotta dig in a little bit more.”

TSN Leafs reporter Mark Masters joins Leafs Lunch to discuss the Leafs sending Rasmus Sandin down to the Marlies, the Leafs back-to-back games this week, and the slow start from Tavares and Marner.

If there was going to be a learning curve for anyone on that line to deal with it was Kapanen, who is replacing the injured Zach Hyman (ACL surgery) at left wing. Adjusting to his new assignment as the line’s forechecker hasn’t been easy for Kapanen, but he weathered several storms on his way to a 20-goal season last year.

“I'm not too worried about it,” Kapanen said. “You want to score as much as possible [from] game one, but that's not the way it is right now. I went through some tough times last year too, so you just have to stay positive.”

With another set of back-to-back games on deck, against Minnesota and then Washington on Wednesday, there’s no time like the present for Toronto’s top line to start proving what they’re capable of.

“We’re just continuing to stay with it; we want to find a way to get some more results,” Tavares said. “But it's such a long season. Just try to take the positives and find the areas you can be better in and continue to stick with it, and then understand just when you got to go to work and do the little things. Hopefully, over time, that's definitely what you believe will pay off.”