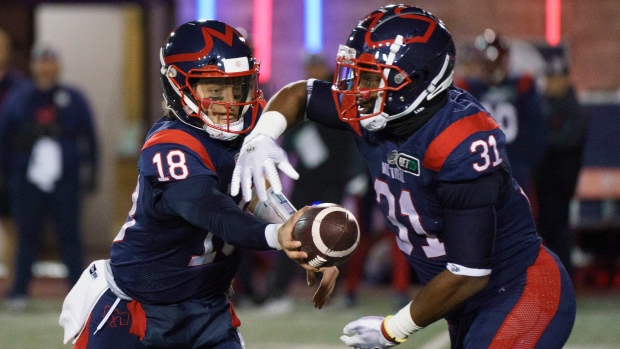 MONTREAL — The Montreal Alouettes played a statement game against the Toronto Argonauts on Friday, improving their win streak to four games with a 37-16 victory.

Montreal’s (6-4) Matthew Shiltz threw for 212 yards and two touchdown passes, both to Eugene Lewis. Yet, last week’s trade with the Edmonton Elks for veteran quarterback Trevor Harris has some wondering how long Shiltz's tenure as starter will last.

Shiltz, who recorded his second straight win Friday, said he's unaffected by what the next few weeks could entail.

“I’m really not trying to prove anything. I want to win football games, I love playing football,” he said. "It’s my passion but it’s not going to define me so if they want to decide to go with (Harris) then they’re going to go with (Harris) and I’m going to be the best bleeping teammate that I can be to this team.”

For Alouettes head coach Khari Jones, having Shiltz on a hot streak and Harris incoming is a good problem to have.

But Harris has yet to take a snap as an Alouette and Jones voiced his confidence in his current starter on Friday.

“(Shiltz is) going to play next week,” Jones said. "We’ll be fine, we’re going to need all hands on deck to continue to win football games and I’m really happy to have (Harris) on board and I think he’s going to be great for our football team but (Shiltz) is playing at a nice level right now and I feel good with him.”

Friday's win made Montreal the No. 1 team in the East Division. Toronto (6-4) fell to second place.

"I learned that they know how to rise to the occasion,” Jones said of the victory. “That was a good statement win and from start to finish we felt in control of that football game.”

“They’ve been building up to this so far and there are still places to go so that’s pretty exciting.”

Running back William Stanback rushed for 203 yards and had a TD for Montreal, while David Cote made three field goals.

“I think everybody is pretty darn disappointed,” said Argos head coach Ryan Dinwiddie. “And given what was at stake and didn’t have that type of performance, especially on offence so that’s unfortunate.

“It’s not going to define our season. We have four more games. We have to find a way to get the ship going in the right direction.”

The Alouettes woke up from a quiet start in the second quarter. Monshadrik Hunter became the first ever Alouette to intercept Bethel-Thompson and Shiltz made Toronto pay on the very next play with a 33 yard bomb to Lewis for the first TD of the night.

“He doesn’t let things affect him and that’s a great trait to have as a quarterback,” said Jones. “We got the interception and right after he threw a touchdown and it was kind of cool because he was like: ‘You want me to hit (Lewis) on this?’ And I was like: ‘If you feel it then go hit him.’ And he felt it so it was nice to see.”

Lewis notched his second TD of the night on an even bigger play when Shiltz found him wide open for a 58 yard play.

Stanback made a one-yard rush on third and goal to give Montreal a 21-10 lead heading into halftime.

After missing his first field goal attempt and hitting the upright on his second, Cote made good the third time around, hitting a 43-yard attempt to give Montreal a 24-10 lead in the third quarter.

Stanback exploded with a 65 yard run in the final moments of the third, his longest rush of the season, and Cote added a second field goal to put the Als ahead 27-10 early in the fourth.

Pipkin scored the only second half points for Toronto, filling in for Bethel-Thompson. The former Alouette rushed for eight yards giving Toronto a 10-7 lead.

With 6:20 left on the game clock, Pipkin rushed on third down for his second touchdown. The Argos opted for a two-point conversion but Chris Ackie intercepted Bethel-Thompson, keeping the score at 28-16.

Najee Murray intercepted Bethel-Thompson a fourth time with just seconds left in the game, returning the ball 64 yards for a touchdown. The pick-six sealed the Als’ 145th home win since the franchise’s return to Montreal in 1996.

This report by The Canadian Press was first published Oct. 22, 2021.