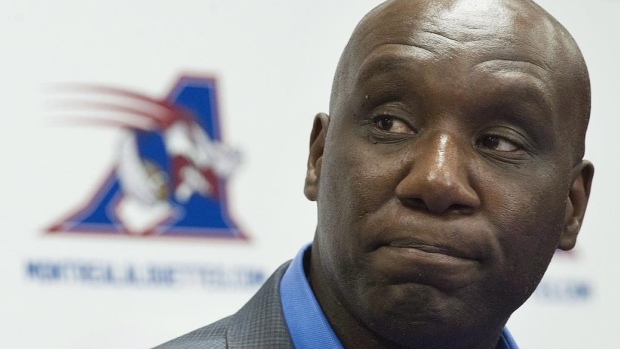 MONTREAL — The reason behind general manager Kavis Reed's firing is shrouded in secrecy to avoid "legal trouble," according to Montreal Alouettes president and CEO Patrick Boivin.

Boivin did not reveal exactly why the organization relieved Reed of his duties Sunday morning, though he says it was unrelated to the team's impending sale or the performance on the field.

It is unclear if the issues that led to Reed's dismissal were on a personal or professional level.

"To comment on specific details could put us in legal trouble. So we cannot say more," Boivin said at a press conference at Olympic Stadium."It's just based on things that were brought to my attention over the course of the last couple of weeks and made it such that we had to act upon it now."

Boivin became increasingly exasperated when pressed for clear answers, which he refused to give.

"I don't know how many times you want me to answer this in the same way," he said. "We came across some information and simply decided this was the time to make the move.

"We made a decision today that we did not have a choice but to make."

Montreal has won two games in a row following Saturday's 36-19 win over the Ottawa Redblacks. The team is 2-2 and second in the East Division despite being without an owner and run by the CFL. Brothers Peter and Jeffrey Lenkov are rumoured to be the team's next owners.

"Impending sale could have happened six months ago. It could happen in six months," said Boivin. "The reality is, if new ownership comes in, I might be out of a job. We have to focus on what we can do with this team, mostly for our fans to continue turning this around, more so than worry about what a potential new ownership team would or would not want to do."

The team does not expect to find a new general manager for the remainder of the season, with Boivin saying the new structure is not temporary.

"I don't think this will change much," said Jones, who took over from fired coach Mike Sherman right before this season began. "I'm going to work hand-in-hand with Joe Mack and we're going to work to get the best guys on the field every game. That's all that I'm focused on.

"It's never an easy time when there's change but the players have adjusted to change well and I have no doubt they will respond well to this also. I've known Joe Mack for a number of years and I'm confident that we'll work well together. We both have the same thoughts in mind and that's to have a winning product out there."

Reed joined the Alouettes in 2015 as the club's special teams coordinator. He was appointed assistant head coach a year later and took on GM duties in December 2016. The Als went 10-30 under Reed as general manager.

In his first foray into CFL management, Reed had the unenviable task of replacing Jim Popp, who led the franchise to eight Grey Cup appearances — and three wins — over his 21 seasons in the post before being fired Nov. 7.