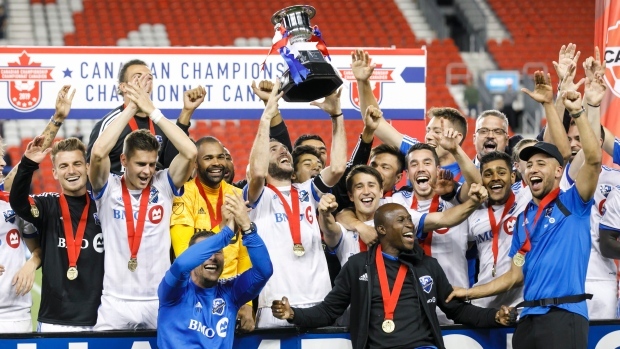 TORONTO — A win, loss and draw added up to victory for the Montreal Impact on Wednesday night.

Montreal beat Toronto FC 3-1 on penalty kicks at BMO Field to win the Canadian Championship. Toronto's Tsubasa Endoh scored in the 70th minute to give the home side a 1-0 win in the return leg that left the two-game aggregate final tied at one.

The Impact posted a 1-0 win in the opener of the home-and-away series last week on an Ignacio Piatti goal. He nearly gave Montreal the win late in the second half but his shot hit the crossbar.

Montreal carried its late momentum into the penalty-kicks session, scoring on all three opportunities.

Rudy Camacho, Bojan and Daniel Lovitz converted from the spot for Montreal. Alejandro Pozuelo scored on Toronto's first attempt but Jozy Altidore hit the crossbar and Patrick Mullins had his shot saved by goalkeeper Clement Diop.

Jonathan Osorio hit the post with Toronto's fourth attempt to seal the result.

The Impact earned a berth in the CONCACAF Champions League with the victory. It was the fourth time that Montreal has won the Voyageurs Cup and its first domestic title since 2014.

Toronto was looking for its eighth Canadian Championship overall and fourth in a row.

"We still created some really good opportunities and had some good moments," said Toronto coach Greg Vanney. "But these games come down to execution. It comes down to those key moments and you've got to do it."

After a tepid opening half with few real scoring chances, Toronto came out strong in the second half.

Richie Laryea broke down the left side and found Osorio at the top of the 18-yard box. Osorio hit a low drive that beat Diop but hit the post.

The home side maintained the pressure and it paid off in the 70th minute.

Pozuelo chipped the ball across the goalmouth to Osorio, who paused and tried to advance before being knocked over. The loose ball was there for Endoh, who drove it past Diop with his left foot.

"At that moment you think you've got them," said Toronto goalkeeper Alex Bono. "You keep pushing and keep pushing and you go into penalty kicks, and from there it's more or less a toss-up."

Toronto's Chris Mavinga was given a red card in the 85th minute for taking down Lassi Lappalainen just outside the box.

Montreal forward Maxi Urruti and midfielder Bojan both started Wednesday after being listed as questionable earlier in the week due to injuries. Impact midfielder Saphir Taider was out due to card accumulation.

Montreal seemed content to focus on possession in the early going rather than push for the valuable away goal.

The Impact did press in the 20th minute as the Toronto defenders struggled to clear. Montreal earned a corner kick with Victor Cabrera heading the ball over the bar.

Altidore had several quality chances in the first half but couldn't put the ball on net. A free kick from 23 yards out sailed over the net and he misfired from in close after chesting a cross from Endoh moments later.

Piatti tested Bono in the 26th minute. The Argentine midfielder's shot from just outside the box forced the goalkeeper to make a strong diving save.

The home side controlled the ball for the rest of the half but had difficulty penetrating Montreal's back line. Toronto's best opportunity came in injury time as Pozuelo found Altidore in the goalmouth but his shot was just wide of the far post.

The home team possessed the ball 65 per cent of the time but had only one of 15 shots on target. Four of Montreal's 13 shots were on net.

A year earlier, the Reds reached the final before falling to Mexico's Chivas Guadalajara on penalty kicks. Montreal lost to Mexico's Club America in the 2015 final.

The Canadian Championship was first played in 2008. This year marks the first time that 13 teams have played from across five leagues.

Toronto and Montreal will now shift focus back to the Major League Soccer regular season.

The Impact, who are clinging to slim playoff hopes in the Eastern Conference, are home to Atlanta United on Saturday. Toronto, which locked up a post-season berth last weekend, will visit Chicago on Sunday.

This report by The Canadian Press was first published Sept. 25, 2019.