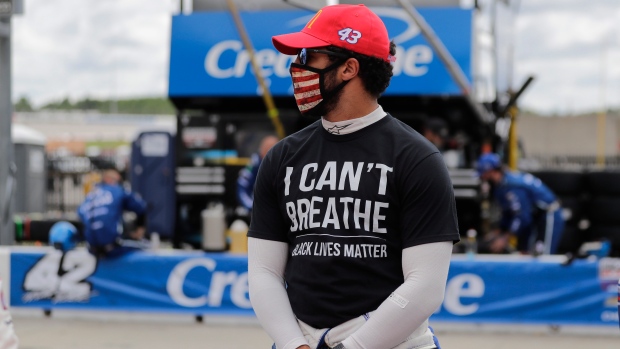 The only full-time Black driver on the NASCAR Cup Series wants to see the end of Confederate flag at races going forward.

Bubba Wallace told CNN on Monday that it's time the controversial flag, viewed by many as a racist symbol, needs to go.

"My next step would be to get rid of all Confederate flags," he said. "No one should feel uncomfortable when they come to a NASCAR race. So it starts with Confederate flags. Get them out of here. They have no place for them."

The 26-year-old native of Alabama wore an "I Can't Breathe Black Lives Matter" shirt before Sunday's Folds of Honor QuikTrip 500 race at Atlanta Motor Speedway amid nation-wide protests against police brutality and racial injustice following the death of George Floyd at the hands of a police officer in Minneapolis last month.

The Confederate flag has a long history with NASCAR and Wallace knows people are going to have a problem with him saying it should go.

"There's going to be a lot of angry people that carry those flags proudly, but it's time for change," he said. "We have to change that, and I encourage NASCAR -- we will have those conversations to remove those flags."

Wallace races in the No. 43 car for Richard Petty Motorsports.