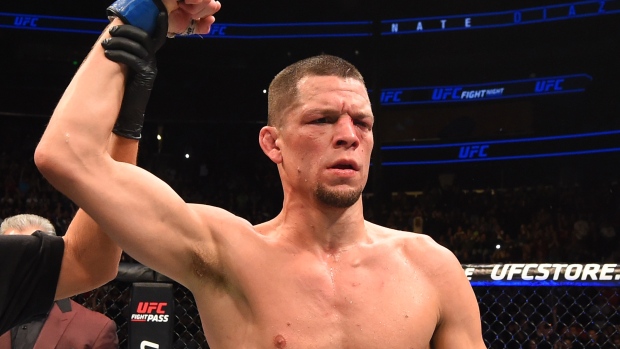 If beating Nick Diaz wasn't enough, Georges St-Pierre may get the opportunity to beat the younger Diaz brother.

Dana White confirmed a report from Canadian mixed martial arts journalist Mike Russell that the UFC is trying to put together a fight between St-Pierre and Nate Diaz.

On UFC Unfiltered, the official podcast of the organization hosted by comedian Jim Norton and former welterweight champion Matt Serra, White said that UFC 227, which takes place in Los Angeles on Aug. 4 is a potential landing spot for the fight.

Sources close to St-Pierre tell TSN that a bout agreement has not been signed. St-Pierre has yet to publicly comment on whether he is interested in this fight, which would take place in the lightweight division and would be the lightest weight class that St-Pierre has ever competed in.

St-Pierre most recently fought in the middleweight division, where he fought heavier than he was accustomed to, en route to winning the championship when he defeated Michael Bisping at UFC 217 at Madison Square Garden last November.

As a result of fighting in a heavier weight class, St-Pierre suffered a bevy of health issues. He was diagnosed with ulcerative colitis, which he attributes to the weight gain.

In past months, St-Pierre has talked about taking fights that would enhance his legacy and while some may argue this would not do so, it could lead to a fight against Conor McGregor in the future.

Diaz has not fought since UFC 202 in August of 2016 when he lost his rematch to McGregor.

Diaz is the only fighter to defeat McGregor in the UFC and has been sitting out in hopes of a trilogy fight. A win over St-Pierre would surely be a step in the right direction.

In recent photos, St-Pierre has looked noticeably lighter and both he and his trainer Firas Zahabi have mentioned St-Pierre has entertained the idea of competing in the lightweight division.

The prospect of this fight adds even more intrigue to an already busy lightweight division, which has been very active in recent months with Khabib Nurmagomedov capturing the title and statement wins by Dustin Poirier and Kevin Lee.

White mentioned that in a perfect scenario, UFC 227 would feature St-Pierre versus Diaz, the previously announced bantamweight championship rematch between T.J. Dillashaw and Cody Garbrandt and a light heavyweight fight between Alexander Gustafsson and Luke Rockhold, which was first reported by Combate’s Raphael Marinho. White emphasized that the fight between Gustafsson and Rockhold would not be for an interim title.