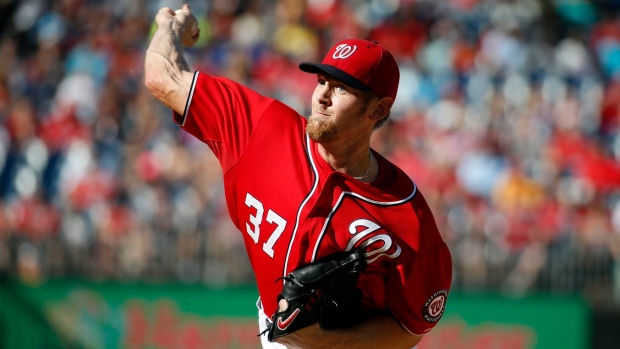 When Strasburg makes his first post-season start Friday for the Washington Nationals, two years after being shut down during the playoffs, Peavy will be the opposing pitcher for the San Francisco Giants in the NL Division Series opener.

Not that the particular matchup means all that much to Strasburg.

"I'm just excited for getting a chance to pitch in the post-season," the right-hander said in his usual monotone, betraying zero emotion, before Thursday's workout at Nationals Park. "It doesn't really matter who I'm facing."

While Strasburg was Washington's opening-day starter, the guy chosen to pitch the first game after the All-Star break, and has been much better at home than away, manager Matt Williams waited until Thursday to make the expected announcement.

"I do know this: I know he's ready," Williams said.

Jordan Zimmermann, who threw a no-hitter in Sunday's regular-season finale, will start Game 2 at Washington on Saturday against San Francisco's Tim Hudson. Nationals righty Doug Fister will start Game 3 at San Francisco against lefty Madison Bumgarner, who pitched a four-hit shutout in the Giants' 8-0 wild-card victory against Pittsburgh on Wednesday night.

Neither manager revealed who would pitch a Game 4, but Washington right-hander Tanner Roark said he'll be heading to the bullpen, which means Gio Gonzalez stays in the rotation.

In 18 starts at Nationals Park this season, Strasburg went 9-3 with a 2.56 ERA. In 16 road starts, he was 5-8 with a 3.82 ERA. One of his worst showings came at home against San Francisco: On Aug. 24, the last time the teams met, Strasburg left after only four innings, having allowed five runs.

From his following appearance through the end of the regular season, covering six starts, Strasburg went 4-1 with a 1.13 ERA, 40 strikeouts and three walks.

Asked if there were any change he made coming out of that rough outing against the Giants, Strasburg said: "I wouldn't say there was anything in particular. ... I can sleep well at night. I can't really worry about whether I'm missing a spot or one side."

In 2012, his season was over by September, a move the club made to protect his surgically repaired right elbow.

"Him having to miss '12 — he loves competing and he loves being out there. ... So I'm happy for him to be able to experience something like this," Washington's Ryan Zimmerman said.

Strasburg, the No. 1 pick in the 2009 amateur draft, was less willing to discuss his thoughts about making his post-season debut after not getting that chance when Washington lost to St. Louis in its other trip to the NLDS.

"I try not to look back on what it was like two years ago," Strasburg said. "I'm just trying to live in the present, and I'm excited for getting the chance now."

Peavy pitched in the 2005 and 2006 NLDS for the Padres, and was a member of the World Series champion Boston Red Sox last season.

"I am a Stephen Strasburg fan," Peavy said Thursday. "For tomorrow, it will be different. I will be trying to beat him with everything I've got. He will be doing the same. He is a great competitor. We all know how talented this guy is. He has as good of stuff as anybody in the game."