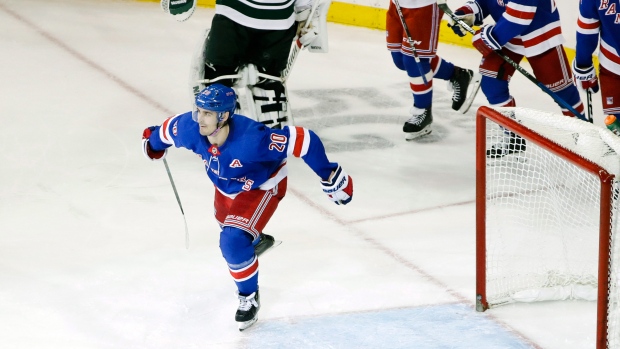 New York Rangers forward Chris Kreider insisted after Monday's win over the Minnesota Wild that he's keeping his focus on the ice while playing out the final year of his current contract.

The 28-year-old scored his sixth goal of the season to push Monday's game to overtime, where the Rangers secured the 3-2 win. Former Ranger Mats Zuccarello, who was traded by the team at the deadline last year, received a standing ovation after a video tribute in the first period of the game.

Kreider said the moment did not have him thinking about his own future.

“Not for one instant,” Kreider told The New York Post. “I don’t think about my contract status. Not at all. I’m serious.

A first-round draft pick in 2009, Kreider has spent his entire eight-year pro career with the Rangers. He carries a $4.625 million cap hit for this season, which is the last of a four-year deal signed in 2016.

“I’ve got to give credit to management, to [president John Davidson] and [general manager Jeff Gorton] and [assistant general manager Chris Drury] and [head coach David Quinn] for the way they’ve gone about communicating with me and treating me,” Kreider said. “I’ve heard horror stories about what can happen with guys in this situation, they can get frozen out or whatever. Not here.

“We’re all part of the team. I’m not thinking about the deadline or my contract or what might happen, I’m telling you, I’m not, and I’m not blowing smoke.

“And with this group, I think it’s easy. I’m trying my best to help our young guys the way the veterans in here helped me when I came into the league. With the talent we have here, with the desire we’re showing and the resilience. I’m focused on the present.

​“I’m focused on doing what I can to help us make the playoffs. That’s what I think about.”