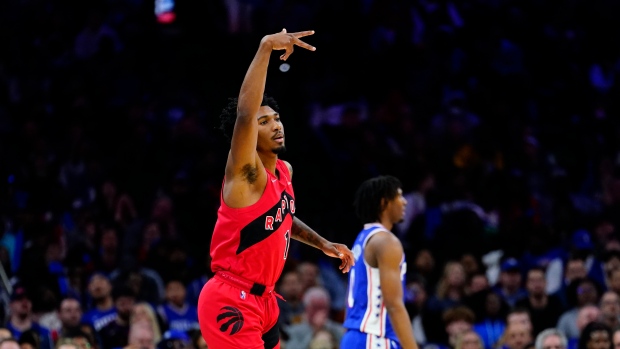 TORONTO – Armoni Brooks was taking a nap in his Toronto hotel room at around 5:00 p.m. on Friday when his agent called to give him the news that he had been dreaming of.

Finally, the 23-year-old guard, whose second 10-day contract was about to expire, could unpack. The Raptors were signing Brooks to a multi-year deal, which includes a partial guarantee for next season, as the team made official on Saturday morning.

Twenty days ago, Brooks was in Atlanta getting ready for a game with the College Park Skyhawks of the G League. After catching the first plane to Cleveland, where he joined the undermanned Raptors on a last-minute emergency call-up earlier this month, the Texas native has taken advantage of the opportunity.

Now, here he was. After sharing the news with his parents over FaceTime, Brooks could finally exhale, even if it was just for a few minutes, and reflect on these hectic past few weeks.

“I think it was just coming in and doing things the right way – coming in the gym everyday, getting extra shots up, getting extra reps in and really embracing the team, the playing style and the culture,” Brooks told TSN moments before his new club hosted the Indiana Pacers on Saturday evening. “I just try to have an impact as much as possible on the floor. Every time I got an opportunity I tried to make the absolute most of it and tried to have a good attitude about everything.”

Unlike most late-season signees, Brooks has been thrown right into the fire, playing meaningful minutes for a team that desperately needed the backcourt depth and shooting he’s provided. It hasn’t taken him long to fit in, or to find his way into Nick Nurse’s circle of trust. Injuries to Fred VanVleet, OG Anunoby, and now Gary Trent Jr., who has missed the last three games with a toe issue, have opened up a path to playing time, but Brooks has also passed Dalano Banton, Yuta Watanabe and Svi Mykhailiuk in Nurse’s rotation.

Even with VanVleet and Anunoby in the lineup to start Saturday’s game, Brooks was the eighth Raptors player to see the court and the first guard off the bench. When VanVleet was given the rest of the night off, following a 70-minute delay due to an electrical fire in the arena, Brooks started the second half in his place. In 23 minutes, he scored six points and tied his career-high with six assists.

“He can shoot the ball,” VanVleet said earlier this week. “He can shoot the ball for a team that lacks some of that sometimes, especially with the bigger lineups we throw out there. It took him a little bit to get his feet under him, but I think he’s finding his confidence. With extended playing time he’s making a couple big plays.”

He’s starting to look more comfortable on both ends of the floor. Brooks made a conscious effort to ease his way in after signing his first 10-day contract. He played 15 minutes before attempting his first shot, three games into his Raptors tenure. He made just one of his first nine three-point tries, he’s hit eight of 19 over the past four games, including a go-ahead jumper midway through the fourth quarter of last weekend’s win in Philadelphia and another late in Thursday’s big victory over Cleveland. He also logged at least 14 minutes in all four contests.

“When you first get here it’s kinda trying to learn everything on the fly,” Brooks said. “So when you get in there it’s really difficult to feel comfortable with what you’re doing because you really don’t know what you’re doing, to be honest. But after more practices and watching more film, I was able to pick up all the plays and tendencies of certain players. I’m just trying to fit in as much as possible without sticking out like a sore thumb.”

Brooks’ ability to shoot the ball is what landed him on the Raptors’ radar to begin with. They’ve lacked shooting depth all season, and with their three-best floor spacers – VanVleet, Anunoby and Trent – each battling injuries and missing time since the all-star break, Brooks addressed an obvious need.

In 49 games with the Rockets earlier this season, Brooks shot just 30 per cent from three-point range. However, he hit 38 per cent of his threes on a high volume of attempts (7.9 per game) in 20 contests as a rookie with Houston last year. He shot 39 per cent on 6.9 attempts per game over three seasons in the G League and 40 per cent on 5.8 attempts in three years at the University of Houston.

However, now that Nurse has gotten a good look at him, Toronto’s head coach is just as intrigued by his defensive upside. He was careful not to make a direct comparison between the two players, but Nurse likened the situation to Trent’s acquisition around this time a year ago. Trent came in and was used primarily as a catch-and-shoot player last season before making a commitment to defence over the summer, which has carried over to his breakout 2021-22 campaign. Nurse believes Brooks has the tools to follow a similar path.

“He’s quick, he’s springy, he can change directions,” Nurse said of Brooks, who made some big defensive plays in Thursday’s win over Cleveland, including a chase-down block of Lamar Stevens with the Cavs making a run late in the third quarter. “There’s some real athletic ability there defensively if we can amp that up a little bit.”

“He doesn’t make too many mistakes. As all the guys do, he’s gotta learn a lot of the stuff we’re doing and understand how important it is and that that’s who we are. I think the ability is there. I think the mindset is there. It’s now getting that ingrained and really getting out there and guarding and executing the schemes.”

His shooting is what got his foot in the door, but his commitment to the defensive end will go a long way in determining how long he sticks around.

“[Nurse is] really intense about the defensive end,” Brooks said. “In the middle of the game I can hear him saying ‘come on, guard ‘em’ and it just gets you going and makes you want to clamp down. That’s something that I really wanted to focus on and it’s good that I have a coach that’s defensive-minded like that and is gonna hold me accountable to continue to grow on that end.”

For the Raptors, having enough flexibility under the luxury tax to utilize their 15th roster spot, first with 10-day contracts and now by signing Brooks to a longer-term deal, was an added benefit of the Goran Dragic-for-Thaddeus Young swap at last month’s trade deadline. It seemed like a small detail at the time, but adding another promising young player to their development pipeline is not insignificant, especially for an organization with a history of turning low-risk fliers into meaningful contributors and even foundational pieces.

Initially, the Raptors wanted to get another look at D.J. Wilson, who impressed in a couple hardship call-ups earlier in the season, but a knee injury cut his audition short. They strongly considered using the 15th roster spot to convert Justin Champagnie’s two-way contract to a regular NBA deal, which would have made him eligible to play in the postseason. Brooks was in the right place at the right time, but to his credit, he took the opportunity and ran with it.

His small guarantee for 2022-23 – $250,000, according to sources – essentially serves as a team option, meaning he’ll likely have to earn his spot again in training camp next fall. The new contract gives him a seven-month head start, though. Not only can he use this stretch run to prove himself and get acclimated to his new surroundings, but he’ll also spend the summer training with Toronto’s other prospects under the watchful eye and instruction of its well-regarded player development staff.

Considering what they’ve seen from the 23-year-old so far, they’re looking forward to having the extended time to work with him and continue expanding his game.

“I think he’s certainly shown us enough to intrigue us for the summer,” Nurse said. “I don’t want to put everything on our coaches, but we’ve got a guy here that can catch and shoot and he’s got athletic ability, then it’s up to us to get him to learn our system and play to his capabilities at both ends.”

“I’m excited because I know the team has a really good development staff,” said Brooks. “I’m excited to be with the team, work out and get better everyday, just embrace the grind. Hopefully we get some good results and we can keep this going.”