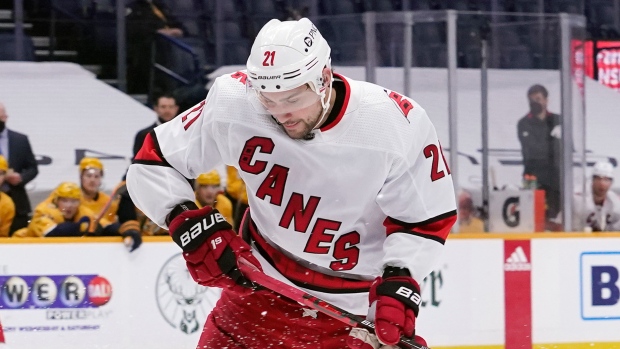 NEW YORK — Carolina forward Nino Niederreiter was fined $5,000 by the NHL on Wednesday for interfering with Nashville goaltender Juuse Saros, the maximum allowable under the collective bargaining agreement.

Niederreiter hit Saros up high in a collision behind the net five minutes into the Hurricanes-Predators game Tuesday night. He was given a two-minute minor penalty for roughing.

Saros remained in net for the rest of the first period before being replaced by Pekka Rinne to start the second. The Predators said only that Saros would be re-evaluated Wednesday and provided no details about the nature of his removal from the game.

“The ref called a penalty,” Predators coach John Hynes said. “It was a hit to the head; we’ll have to see where it goes from there. There’s not much more to comment on it. What we all saw was what happened.”

Saros allowed two goals after the collision, and Nashville lost the game 4-2 after Rinne allowed one on 17 shots. Saros has started 12 of Nashville's first 22 games, though Rinne figures to take the reins moving forward.

Kasimir Kaskisuo would then serve as the Predators' No. 2 goaltender. Kaskisuo has one game of NHL experience, allowing six goals on 38 shots last season with Toronto.