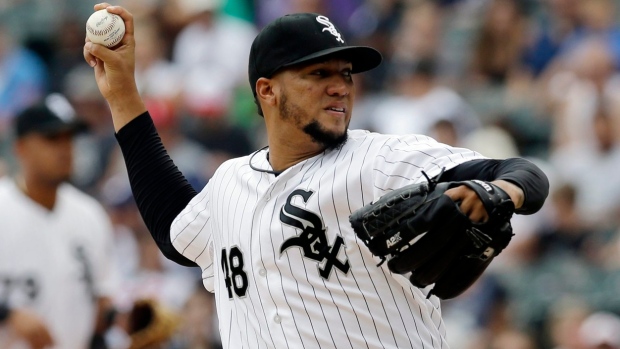 CHICAGO - Hector Noesi thinks he is a better pitcher than he was when he struggled at the start of the season. One of his former teams got a closer look at his improvement on Sunday.

Noesi pitched five-hit ball into the seventh inning for his first win in a month, leading the Chicago White Sox to a 1-0 victory over the Seattle Mariners.

"He's a tough kid," Chicago manager Robin Ventura said. "I mean, he's confident and he knows what he can do. Sometimes you get an opportunity and you run with it, and I think that's what he's done."

Noesi (3-6) struck out five and walked two in 6 2-3 innings, bouncing back from a shaky outing against the Los Angeles Angels. The right-hander pitched for Seattle for parts of three seasons before he was traded to Texas after two April relief appearances.

Noesi pitched in three games for the Rangers before he was let go again. Chicago claimed him off waivers April 25, and the crisp performance against the Mariners made him 3-5 with a 4.13 ERA in 14 games with the White Sox.

"Yeah, it did cross my mind," Noesi said of pitching against Seattle, "but if I put it in my mind I would get lost trying to do too much."

Chicago finished with just two hits after it had four in Saturday's 3-2 loss in 14 innings. But Conor Gillaspie scored on a wild pitch in the first and Noesi combined with two relievers on a five-hitter.

Eric Surkamp got Robinson Cano to fly out with the bases loaded for the final out of the seventh, and Jake Petricka pitched two innings for his third save in four chances. The solid relief work came one day after the White Sox blew a 2-0 lead in the ninth inning.

"We didn't swing the bats extremely well," Mariners manager Lloyd McClendon said. "Balls we did hit hard they made great plays on. That's the way it goes. That's baseball."

Seattle right-hander Taijuan Walker (1-1) lasted just four innings in his second start of the season. The 21-year-old Walker, one of baseball's top pitching prospects, struggled with his control in his first loss in five major league appearances.

The White Sox took advantage of Walker's wildness to grab the lead in the first. Gillaspie walked with two outs, advanced to third on Jose Abreu's single and scored when Walker threw his first of two wild pitches on ball four to Adam Dunn.

Walker then got Alexei Ramirez to bounce into a fielder's choice, ending the threat. The White Sox left a runner in scoring position in each of the first five innings.

Walker allowed two hits and struck out three while throwing 83 pitches on a humid day. He tossed six innings in a 10-4 victory at Houston last Monday in his season debut.

"Command of my fastball wasn't there," Walker said. "Definitely going to go back and watch video and figure out what's going on with that."

Dustin Ackley and Brad Miller had two hits apiece for the Mariners, who had won five of six.

Gillaspie also walked in the third before he left with a bruised right knee after he was hit by a pitch from Dominic Leone in the fifth inning. Gillaspie took a few shaky steps toward first before he was replaced by pinch-runner Leury Garcia.

"It sounded bad and he seemed like he couldn't do anything, so we had to take him out," Ventura said.

Second base umpire Dana DeMuth also departed in the fifth with a strained hamstring after colliding with White Sox second baseman Gordon Beckham. The game continued with three umpires.

NOTES: It was Noesi's first win since June 9 against Detroit. ... Petricka has a string of eight consecutive scoreless appearances covering 11 innings, lowering his ERA to 1.85. "His progression and his rise through the bullpen's been pretty impressive," Ventura said. ... Seattle returns home to face Minnesota in the opener of a four-game series Monday night. Mariners RHP Hisashi Iwakuma (6-4, 3.33 ERA) and Twins RHP Kevin Correia (4-10, 4.95) are slated to pitch the first game. ... The White Sox begin a four-game set at Boston on Monday night. RHP Scott Carroll (2-5, 5.05 ERA) takes on Red Sox RHP Clay Buchholz (3-4, 6.22) in the series opener.