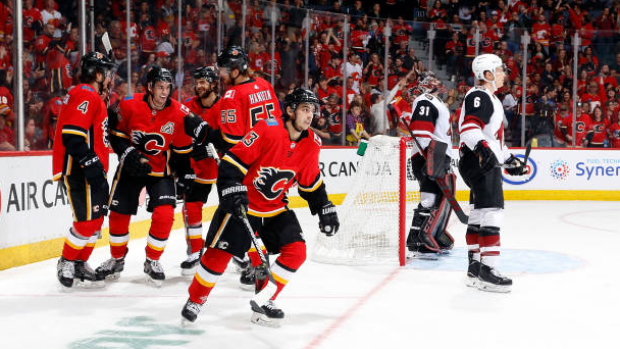 The old sports adage says that defence wins championships. In the National Hockey League, that line of thinking is increasingly under scrutiny.

One of the fascinating developments in the modern era of hockey is that the offensively dominant teams are the ones realizing success, and that’s particularly true during the postseason. It does seem a bit counterintuitive, but great offensive teams tend to be deadly for two reasons. One, they pile up shots, scoring chances and goals, creating scoreboard separation easier than the average NHL team. Two, the more teams play in the offensive zone, the less they play in the defensive zone. That means fewer shots, scoring chances and goals against.

We’ve seen a lot of different styles of offence from Stanley Cup winners over the last 10 years. The Los Angeles Kings, who won in both 2011-12 and 2013-14, played a relentlessly effective dump-and-chase style of hockey and territorially dominated opponents. The Pittsburgh Penguins, who went back-to-back during 2015-17, didn’t generate the same type of shot volume as their predecessors in Los Angeles. But they were lethal about turning seemingly ordinary shooting opportunities into dangerous ones, regularly finding open shooters in the slot. Last year’s Washington Capitals were similarly effective in their ability to pierce the interior, and married it to one of the league’s best power-play units.

Looking at the statistical resumes of Stanley Cup winners over the last 10 seasons, one measure jumps out as quite meaningful. If you look at the last 25 games of the regular season – a big enough sample to measure team performance, and recent enough to calibrate and adjust for roster changes incurred over the course of the year – there is one notable commonality across all 10 of these winners: their ability to generate scoring chances in volume at 5-on-5. (I went through all offensive measures available to the public and have accordingly subset down to those that have generally been leading indicators of future success.) 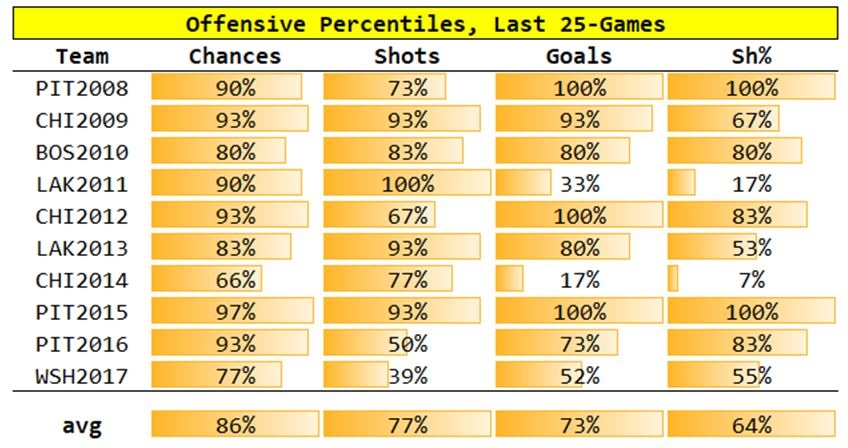 Let’s consider the defensive side now by the same exact measures. What ranks do we see from our historical Cup winners? 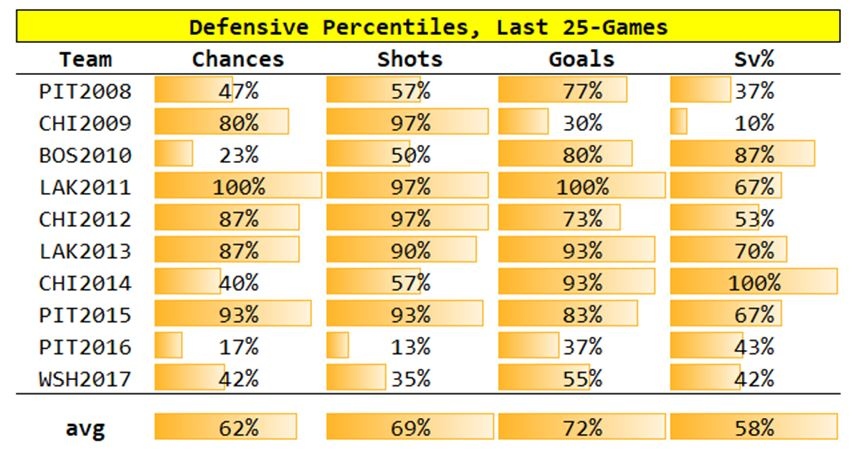 Being stronger defensively certainly helps a team’s cause, but it is interesting to see a relatively weaker relationship between defensive performance and the resumes of our historical Stanley Cup winners.

I mentioned a shift in the hallmark of Stanley Cup winners earlier, and it’s obvious in the table above. Whereas modern era Cup winners tended to pummel the competition territorially, 2016-17 Pittsburgh and 2017-18 Washington were more about trading opportunity. Their bet was that their skill players could turn shots into chances and chances into goals better than their opponents could, and they were right.

This does offer up another question, one pertaining to the 2018-19 regular season. If offensive performance (and the ability to generate scoring chances with high degrees of frequency) really matters, how do we go about separating contenders and pretenders?

The below graph shows each team’s chance generation per-60 minutes over the last 25 games: 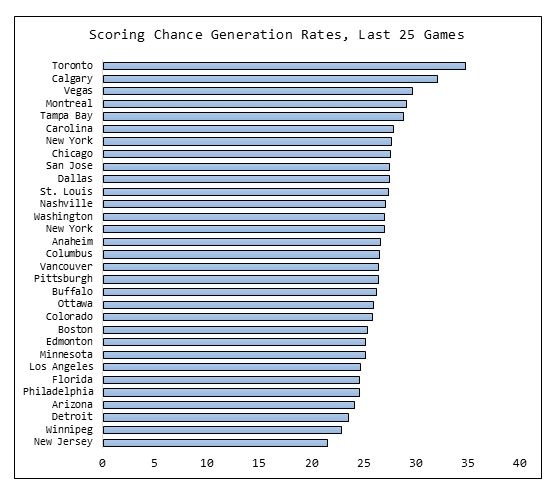 I mentioned over the weekend that the one reason I remain bullish on the Maple Leafs is that they can generate attack like few other teams in the league, and despite some ugly losses of late, no one has really been able to slow down their forward group. Of course, that doesn’t do a whole lot of help when your first-round opponent could end up being the second-best team in the league, but it is something to note.

Calgary, Vegas, and Tampa Bay also jump off the page here in a good way. Calgary and Tampa Bay have sat near the top of these rankings all season long, and Vegas have been a freight train since the trade deadline. On the other hand you have Winnipeg. The Jets have decided to save their ugliest, least-effective brand of hockey for the stretch run right into the playoffs. And it’s not just their inability to generate scoring chances. The Jets over the last 25-games sit 24th in Corsi%, 30th in Scoring Chance%, 20th in Goal%, and 23rd in Point%.