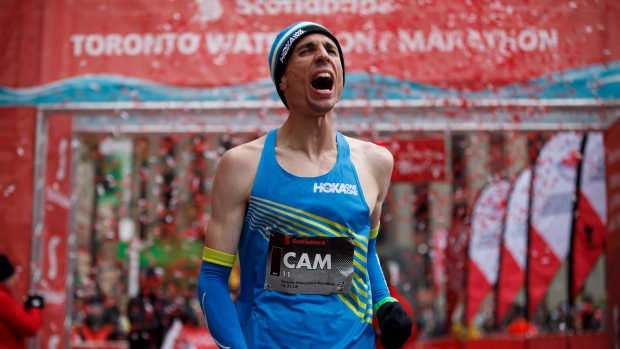 Cam Levins has only run one marathon, but it sure was impressive. On Sunday, at the Scotiabank Toronto Waterfront Marathon, he’ll run his second, hoping it can also prove memorable.

The native of Black Creek, B.C., ran last year’s Toronto race in a Canadian record time of 2:09:25. The previous mark was set by Jerome Drayton in 1975 and was the longest-standing Canadian track and field record. Over the years, many runners had come close but no one was able to better the mark until Levins finally did it.

This time out, he’s not as worried about records as he is in a different goal.

“Last year I was strictly targeting the Canadian record,” said Levins. “This year, it’s something that’s still on my mind but most importantly is getting on that Olympic team. As long as I can get myself to the start line in Tokyo, I’ll be happy with whatever the result will be.”

Sunday’s race will double as the official Athletics Canada marathon trials. The top Canadian male and female finishers will receive automatic pre-selection for the Tokyo 2020 marathon next August, providing they achieve the Olympic standards of 2:11:30 (male) and 2:29:30 (female).

Making this just his second marathon wasn’t Levins’ original plan. He’d hoped to run the London Marathon in April but an issue with his left knee forced him to the sidelines.

“A lot of people will say that one of the most difficult things is getting to the start line of the marathon healthy,” the 30-year-old Levins joked, “so I’ve done that this time.”

While he has just that single marathon to his credit, he is no stranger to distance running, having represented Canada at the 2012 Olympics at the 5,000 and 10,000 metre distances. Still, he won’t face the same fear of the unknown as he did in 2018.

“I think I was kind of naïve going into last year’s marathon,” he stated. “I’m less anxious about what to expect now.”

His build up to this race has been done mostly in his home in Portland, Ore., with side trips to Cedar City, Utah, where he works with his coach, Eric Houle. While the results in some shorter races haven’t been as good as he might have liked, Levins did pronounce himself fit and ready for Sunday’s run through Toronto.

“It’s kind of hard to screw up the marathon build up, I feel,” he stated. “You have to be able to run a certain speed for a large distance and having that strength is really what’s important.”

On the other side of experience scale is Reid Coolsaet of Hamilton, Ont. A two-time Olympian in the marathon who has run five races under 2:12. He posted a time of 2:10:55 at this race in 2011 to book his first trip to the Olympic Games.

He’s hoping the familiarity of the course and the support of the local fans will buoy his chances on Sunday.

“Just being a Canadian race, fairly close to my home makes it cool,” he said. “If I go and race somewhere like Rotterdam or Berlin, I rarely hear my name. Here, a lot of people know who I am, so it feels like I get a lot more support on the course.”

Coolsaet is looking for one more shot at being an Olympian but knows at 40, Father Time is not on his side. Still, he feels good about his chances on Sunday.

Coolsaet has plenty of experience on which to draw. In addition to the 2012 and 2016 Games, he’s raced around the world including his personal best of 2:10:28 at the 2015 Berlin Marathon and a ninth-place finish at last year’s Boston Marathon.

He admitted that while he may not post the qualifying time, he could still satisfy the International Amateur Athletics Federations’ Olympic criteria through his position in the world ranking.

“I’m not getting any faster,” Coolsaet quipped. “I’m just trying not to lose any speed.”

On the women’s side, Kinsey Middleton, the top Canadian finisher at the Waterfront Marathon a year ago, will try to repeat against a deep international field that includes Kenya’s Birukatyit Degefa Eshetu, a three-time winner of the Houston Marathon.

Not all those running will be looking at prize money or Olympic spots. There are 26,000 runners in the 30th edition of the Scotiabank Toronto Waterfront Marathon representing every province and 70 different countries.