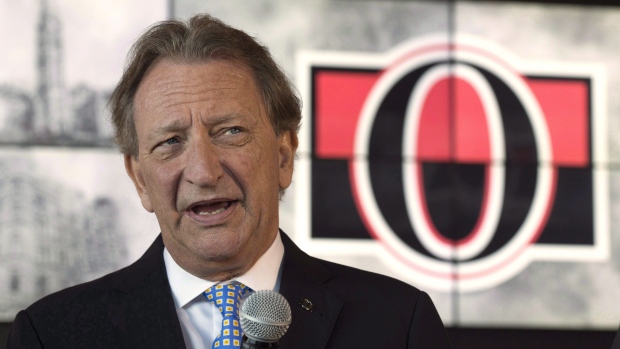 Ottawa Senators owner Eugene Melnyk dismissed the idea of trading the team's top two first-round picks for the No. 1 overall selection on Monday.

“The idea of trading our third and fifth picks for the No. 1 pick is nonsensical,” Melnyk told Postmedia's Bruce Garrioch in an email. “We’re very excited to welcome our many new Ottawa Senators that will come to us via the upcoming draft.”

The New York Rangers won the No. 1 overall pick in the second phase of the draft lottery last week and are expected to select Rimouski Oceanic star winger Alexis Lafreniere in October.

The Senators, who entered the first phase of the draft lottery with both the second and third-best odds of winning the first overall pick - thanks to owning the San Jose Sharks selection in addition to their own - dropped back to third and fifth, while the Los Angeles Kings moved up to No. 2.

In his latest mock draft, TSN Director of Scouting Craig Button projected the Senators would select German centre Tim Stutzle at No. 3 and Ottawa 67's forward Marco Rossi at No. 5.

"The versatile forward has unbelievable imagination and stickhandling and adds to a really great group of prospects in the nation's capital," Button wrote of Stutzle potentially joining the Senators in his first mock draft on June 26. "He's an A-plus player."

"He's an elite playmaker and an A prospect in the mould of Nicklas Backstrom," Button said of Rossi.

The Senators are waiting to learn where their third and final pick of the first round will land, acquired from the New York Islanders at the trade deadline for Jean-Gabriel Pageau.

The Florida Panthers were the last team to trade the No. 1 overall selection, sending the pick to the Penguins in 2003, when Pittsburgh drafted Marc-Andre Fleury.