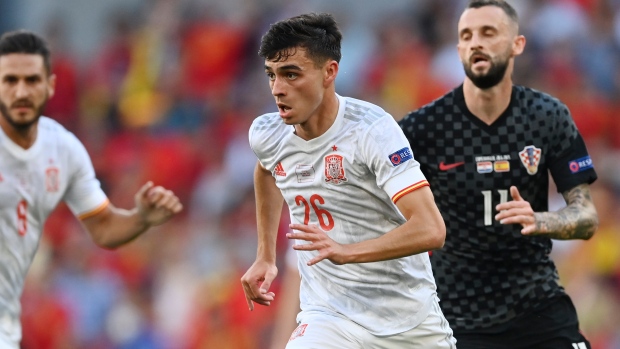 ST. PETERSBURG, Russia (AP) — Spain is on the charge at a major soccer tournament with a creative and technically gifted Barcelona player calling the shots from central midfield.

Only 18 and already seemingly indispensable for the national team, Pedri González has been given the keys to a midfield that was once the domain of two modern-day greats in Xavi Hernandez and Andres Iniesta.

The comparisons are inevitable — and maybe justified — and will only become more widespread if Pedri leads Spain to the European Championship title in the coming days, just as Xavi and Iniesta did in 2008 and 2012 amid a golden era for the country.

Certainly Switzerland needs to be on top of Spanish soccer’s new midfield conductor in the first quarterfinal match at Euro 2020 in St. Petersburg on Friday.

Pedri, who plays on the left side of Spain’s ball-hogging central-midfield three, is playing in his first major tournament — he only made his senior international debut in March — and is tied for first place for most chances created (10) and has more passes in the opposition half (233) than any other player.

The youngest Spaniard to play at a European Championship, Pedri also became the youngest ever player in a knockout-stage game at the tournament — at 18 years, 215 days — against Croatia in the round of 16.

Perhaps most impressively, he is one of only two outfield players in Spain’s squad to have played every minute of their team’s games at Euro 2020.

Another European Championship record he holds comes with less distinction. After 20 minutes of the 5-3 extra-time win over Croatia, Pedri sent a back-pass from near the halfway line to Spain goalkeeper Unai Simon, who failed to control the ball and only succeeded in deflecting it into the goal.

It is the longest own-goal in the tournament’s history — at 45 meters out — yet Pedri shrugged off that misfortune to produce a dominant performance against a highly regarded Croatia midfield led by veteran Luka Modric.

Pedri’s technique, vision and ability to maneuver himself into space and find teammates with his astute passing is astonishing given his age. He is coming off his first year at Barcelona, which he joined from Las Palmas in the offseason, and has already played 60 games for his club and his country this season.

He has also been picked to play for Spain at the soccer tournament at the Tokyo Olympics.

Don’t expect Luis Enrique to save Pedri's legs for that.

Midfield will be an area Spain will look to take charge of against Switzerland, which will be missing captain Granit Xhaka because of suspension.

Xhaka was selected as UEFA’s man of the match after Switzerland beat France in a penalty shootout — following a 3-3 draw through extra time — to advance to its first quarterfinal match at a major tournament since the 1954 World Cup.

Denis Zakaria, a defensive midfielder for Borussia Mönchengladbach, would be the most likely replacement for Xhaka, but coach Vladimir Petkovic was giving little away on Thursday.

“The natural thing I want to see tomorrow is that everybody has to give 10% more, because this is not just about replacing Granit Xhaka but what's needed to win the game," Petkovic said. “I am convinced as a team we have a lot of other leaders on the pitch and we will show that.”

Still, Switzerland faces the tough task of avoiding a natural comedown after one of the biggest wins in its history.

“Nobody will ever forget this game,” Switzerland midfielder Remo Freuler said. “Nobody can take this magical night away from us.”

Spain’s win over Croatia came on the same evening, but Enrique has the advantage of calling on a deeper squad for a match taking place four days later.

Fatigue, and the shrewd use of substitutes, is proving a key factor at a tournament that is coming off a grueling, pandemic-affected club season. Both teams are likely to make changes to freshen up for a shot at the semifinals, with winger Dani Olmo among those in line for a recall to Spain's team after coming off the bench to set up the two goals in extra time against Croatia.

Expect Pedri to start once again, though. He is already a player Spain cannot do without.