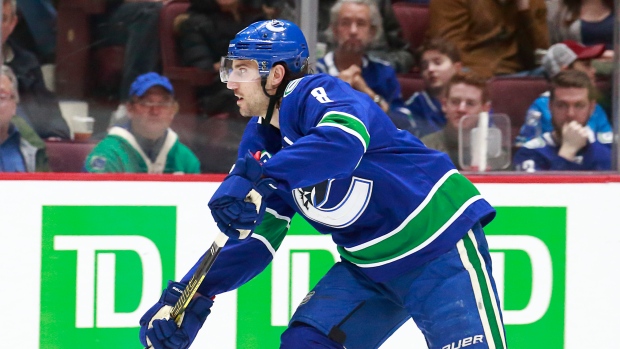 Vancouver Canucks pending unrestricted free agent Chris Tanev is hoping he won't have a new partner on the blueline next season after pairing with rookie Quinn Hughes this season.

Tanev scored two goals and matched a career-high with 20 points in 69 games this season, often playing alongside the 20-year-old Hughes.

"I'd love to stay here and play with Quinn as long as I'm able to," Tanev told NHL.com on Tuesday. "I think we played great together when we did this year and I think we both enjoyed it. … I think he's an extremely dynamic player that is only going to get better and better for this organization, and it was pretty special what he did this year."

Undrafted to begin his career, Tanev made his NHL debut with the Canucks during the 2010-11 season and has spent the past 10 seasons with the team. He is currently in the final season of a five-year, $22.5 million contract signed with Vancouver in 2015.

Tanev said Tuesday his focus will not be on his next deal when the Canucks return to the ice for their best-of-five play-in series against the Minnesota Wild.

"I'm ready to play hockey," Tanev said. "I think I can get a contract regardless. I feel like I'm going to play well. If we play playoffs, then I'm confident in my abilities. If the [NHL/NHLPA Collective Bargaining Agreement] does get voted through, you take all those things into effect."

The Canucks currently have $63.5 million committed to 14 players towards next season's projected $81.5 million salary cap, per Capfriendly.