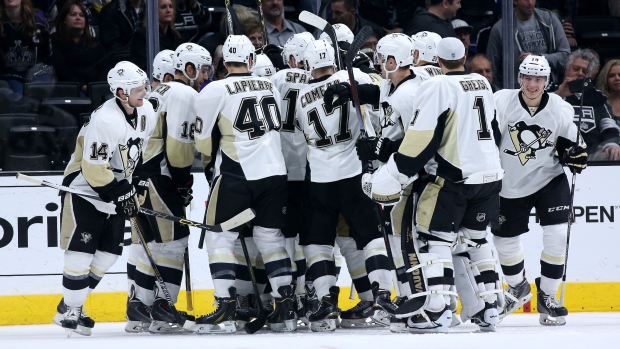 If you are an underdog team looking to go on some unexpectedly deep run to the Stanley Cup, this is probably the year to do it. Quite frankly, there aren’t any heavy favourites expected to advance – Tampa Bay and St. Louis probably figure to be the chalk in their respective conferences, but even their situations are a bit untenable. While both are fantastic skating teams at 5-on-5, Tampa Bay’s special teams are a very real concern, and St. Louis is going with a goaltender, Jake Allen, that has played one playoff minute in his NHL career.

As a result, I think the most intriguing team in round one is the Pittsburgh Penguins. The Penguins, of course, have had a ‘disastrous’ season by Pittsburgh standards – they’ve been beaten senselessly in the injury department, scraped into the playoffs despite lofty pre-season expectations, and wrapped up the final 20 games of the regular season by accruing just 17 total points.

What I find most interesting about this Pittsburgh team is that, while the injuries (particularly to the blueline in the form of Kris Letang, Olli Maatta and Christian Ehrhoff) are massively impactful, the team’s 5-on-5 play didn’t really take an expected dip. Despite the handwringing about the abominable performance of Mike Johnston’s team, the Penguins still territorially dominated their competition on most nights – the possession just didn’t translate to goals in that small stretch, and what we are left with is the thought that the New York Rangers are going to just steamroll a dying team in four or five games.

I recognize that the goal-scoring is perhaps partly due to the loss of critical talent on the back end. But, it strikes me that another portion of this is the fact that Pittsburgh – a team that shot 8.50% at even-strength from 2009-2014, good for best in the league – was simply just getting beaten up by random variance.

Look at Pittsburgh from a historical perspective (the Malkin/Crosby era). They’ve generally been just a cut above the league average shooting percentage, and have only significantly dipped twice in the past five years.

This is a rolling 20-game average, which does a good job at smoothing out short-term fluctuations and drawing attention to big rises or big dips. In the instant matter, we are looking at the very end of team level shooting percentage. The dotted line in the above graph sits at 7.8%, the league average in 5-on-5 shooting percentage.

The important thing to do in these cases is look at what’s happened historically in the event that a team’s percentages skew wildly out of proportion. For Pittsburgh, it’s happened twice in the past five years. And in both of those cases, the shooting percentage instantly regressed towards the team average.

We know that Pittsburgh’s shooting percentage is bizarrely low right now, and I think most sensible folk would bet on that bouncing back over the next x amount of games. That’s only part of what makes this team dangerous, though.

In my Tuesday column, I wrote about the importance of recent performance from a possession standpoint – specifically, why exhibiting dominance in controlling play at even-strength in recent games can be very predictive of post-season outcomes.

Pittsburgh, despite the injuries and separate from their incredible inability to find the back of the net, has done quite well at winning the shot-clock battle. In fact, they were the best 5-on-5 playoff team in the window I looked at. The shots may have not led to as many goals as we expected over that 20 or so game stretch, but it’s still reasonable to bet that continued success in the shot generation department will translate in some way to goals and, ideally, wins.

Make no mistake, though: Pittsburgh’s still fighting an uphill battle. We may recognize that perception of the team is low and unfair, but that doesn’t necessarily make the challenge in front of them any easier. Their goaltender has historically came apart at the seams in the playoffs, the missing pieces on the back end either aren’t back yet or aren’t coming back, and the team they’re facing represented the Eastern Conference in the Stanley Cup Final.

But, this is still a team led by the likes of Sidney Crosby and Evgeni Malkin. And, the underlying numbers – the numbers that are historically more predictive than past goal-scoring performance – still look fantastic.

And, as a result, I think this series is going to be a lot closer than people are assuming.