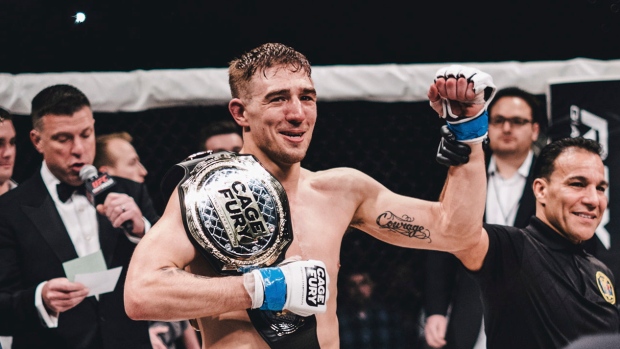 PHILADELPHIA — Kyle Daukaus won a convincing fight on a MMA reality show that looks for the next big UFC star. So he waited for Dana White to offer him a contract.

For a Philly kid who grew up rooting for Georges St-Pierre and Chael Sonnen, this was the career moment of a lifetime.

"I was excited about the contract," Daukaus said. "I believe I had the best performance that night."

But when White offered the first two fighters UFC contracts on his "Contender Series," Daukaus sat there with one thought: Uh oh. White probably wasn't going to make it 3 for 3 for the prospects. Daukaus' hunch was correct.

"There are parts of his game that aren't really there yet and he would have trouble in the UFC with some of the guys that we have," the UFC President said on the show. "I think he's got a ton of talent, I think he's got a lot of promise. I just don't think he's ready right now."

In reality show terms, Daukaus was voted off the island.

The 26-year-old Daukaus ran into White after the show aired in June and was told he just needed more experience to get the call to UFC.

"One fight isn't experience, but you never know," Daukaus said. "I could have a very dominant performance and they could say, you know what, we made a mistake and we want this guy."

Daukaus was raised in Northeast Philly in the Tacony neighbourhood and still lives and trains in the city. He watched UFC fights with his older brother and they'd "roll around in the basement" before they entered a grappling tournament about eight years ago. Both finished second despite minimal training. They soon decided to take up MMA and both are fighters. Daukaus' brother is also a Philly police officer.

Daukaus needed time to find his niche in MMA.

"I was a fat kid out of high school," he said. "I was walking around at 260, 265 pounds. So when I first started training, my coach told me I needed to take heavyweight fights. It wasn't smart of me. I lost a lot."

Daukaus lost a handful of amateur fights — including one on a 2016 CFFC card — and hardly looked like a prized prospect. He eventually took a step back and decided to fight at a lower weight. He followed a plan set by noted MMA fitness expert Mike Dolce and soon dropped to 205 pounds. He fought at 185 pounds "and I just found my calling."

He found success at his proper weight as a pro, ripping off an unbeaten streak that included a CFFC middleweight title victory in February over Jonavin Webb. His win caught the attention of UFC and earned him the "Contender" invitation.

The Daukaus fight is one of four pro title fights on the Fight Pass card. The welterweight title is up for grabs after Philadelphia's Sean Brady vacated the belt when he signed with UFC.

He just hopes White is watching.