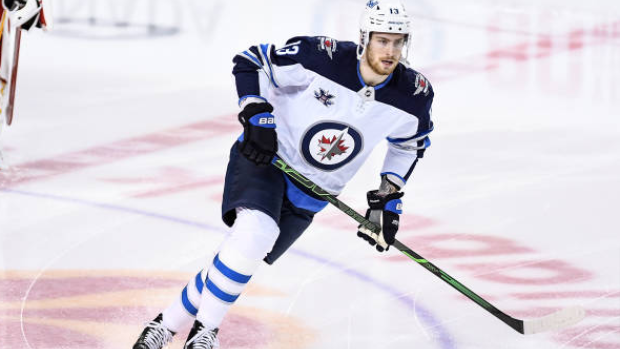 Pierre-Luc Dubois had a quiet night in his debut for the Winnipeg Jets, going without a point and finishing as a minus-1 in 13:10 of ice time.

Dubois said after the Jets 3-2 loss to the Calgary Flames that he expects more from himself moving forward after a 14-day quarantine period.

"I think the legs, the hands, the head, you're trying to get everything back and felt as the game went on, I was getting some things back, but I can play a lot better than that," Dubois said, per NHL.com.

The 22-year-old centre last played on Jan. 21, when he saw just 3:55 of ice time against the Tampa Bay Lightning after being benched by Columbus Blue Jackets head coach John Tortorella. He was acquired by the Jets, along with a third-round pick, two days later for Jack Roslovic and Patrik Laine.

Dubois has one goal in six games between the two teams this season, but said he was only beginning to find his game in Columbus when the trade occurred.

"I think the biggest jump, the biggest challenge, is to get back into game rhythm," Dubois said. "Last game I played was Game 4 of the season and then Game 5, that's kind of preseason games right there because we didn't have them. Now it's Game 15, the season's well underway.

"During seasons, there's always steps that you take. There's a step midway through the season after a couple of games at Christmas, then the playoff race then the playoffs. My goal is just to kind of skip that step of the preseason games and get right to where we're at right now."

Jets head coach Paul Maurice focused on the positives in Dubois' game Tuesday and promised that the centre will see more ice time as he continues to acclimate.

"The exciting part (is) he's going to just keep getting better and better because he's a powerful man," Maurice said. "There looks like there won't be holes in his game. He defended well, battled hard, made smart plays, showed some real nice finesse picking a stick in the offensive zone to open up a chance, so this guy's going to be a big, powerful guy. He'll get more ice time as we get moving forward and he gets his sea legs."

The Jets, who sit fourth in the North Division at 7-4-1, will be back on the ice Thursday for the first of two games against the last-place Ottawa Senators.