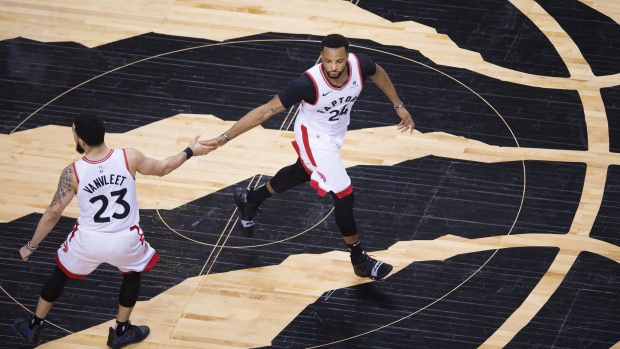 Their raw emotion evident, their frustration palpable, Fred VanVleet and Norman Powell found themselves once again addressing the media in the aftermath of another shooting of a Black man by police.

The two Toronto Raptors are among the many players that have been using their platform at the NBA's post-season bubble to speak out against systemic racism and police brutality. But after watching the video of Jacob Blake being shot multiple times, apparently in the back, by police in Kenosha, Wis., VanVleet told reporters he was "in a different place today, emotionally speaking."

The situation has caused the Raptors to discuss their options on protesting as the team gears up for Game 1 of an Eastern Conference semifinal against the Boston Celtics on Thursday.

"You know coming down here and making a choice to play was supposed to not be in vain, but it's just starting to feel like everything we're doing is going through the motions and nothing's really changing," VanVleet said Tuesday. "Here we are today with another unfortunate incident, so my thoughts today are with that man and his family and trying to wrap my mind around what they're going through."

The Raptors have been at the forefront of the NBA's social justice initiatives, arriving to the league's Walt Disney World campus in buses emblazoned with the "Black Lives Matter" slogan and asking for justice for George Floyd, Breonna Taylor and other Black people who have been killed by police.

VanVleet said now it's time for others to get involved.

"We're the ones with the microphones in our face, we're the ones who have to make a stand," VanVleet said. "The responsibility falls on us to make a change to stop being oppressed. At what point do we not have to speak about it any more?

"Are we going to hold everybody accountable, or are we just going to put the spotlight on Black people or Black athletes or entertainers and say 'What are you doing? What are you contributing to your community? What are you putting on the line?'"

VanVleet and Powell said players have discussed options on how to respond to Blake's shooting. Powell said boycotting games has been discussed.

"There's a lot of things that have been talked about on how to approach this sensitive issue," Powell said. "I think everybody's at the point of sitting up and saying 'Black Lives Matter' and having these discussions and Zoom calls and putting apparel on, that's not getting the job done. Taking a knee for the anthem, that's not getting the job done.

"It's starting to get washed out. I feel like Black Lives Matter is just another thing in conversation now."

"Something needs to happen where you're forcing those people who can affect and make the change to do something," he added.

VanVleet said not playing could motivate the right people.

"We knew coming here or not coming here wasn't going to stop anything, but I think ultimately playing or not playing puts pressure on somebody," he said. "For example, this happened in Kenosha, wouldn't it be nice, in a perfect world, if we all said we're not playing, and the owner of the Milwaukee Bucks steps up to the plate and puts pressure on the district attorney's office and state attorneys and governors and politicians there to make real change and get some justice.

"I know it's not that simple, but if we're going to sit here and talk about making change, then at some point we're going to have to put our nuts on the line and actually put something up to lose rather than just money or visibility."

The Wisconsin Department of Justice is leading an investigation into the shooting, which is expected to take several weeks. The officers were placed on administrative leave, which is standard practice in such cases.

"They believe they're following the law and they think that's OK," Powell said. "'We did an investigation and we found them not guilty.' And they go home and sleep at night perfectly fine. They live their lives and go to their jobs.

"Until they're on the line for getting fired and having to lose everything, nothing's going to happen."

VanVleet said his family has arrived in Orlando, and he will be able to see them in about a week. He said he thinks of his two young children when he sees an incident like the Blake shooting.

"We all personalize everything, so to personalize a situation like that and to think about my babies having to see that, or my son is going to have to walk some of these same environments and you have to teach your kids about how to interact with the police, and what to do, what not to do, you become helpless a little bit and it's scary."

Tuesday's comments from Powell and VanVleet come with the Raptors getting ready to start a second-round series with the Celtics.

"I don't really care about that right now to be honest with you," VanVleet said. "I'm sure when Thursday comes and it's time to play I'll be able to lock into basketball, it's not really that hard for me. I know that's (the Celtics) an unbelievably talented team, a great team, and I think the fans have been looking forward to this for a long time.

This report by The Canadian Press was first published Aug. 25, 2020.